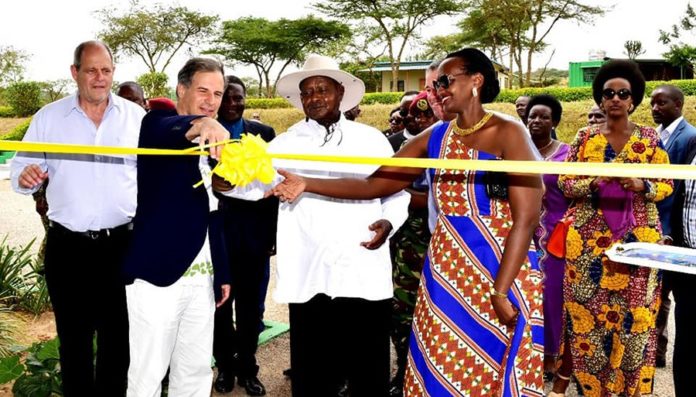 President Museveni yesterday commended local and foreign investors for offering their best in the economic transformation of Uganda during the commissioning of a milk processing plant, Vito Tomosi Company, worth $15 million in Kiruhura district.

He says there should be more investment partnerships between Uganda and Israel to exploit further the latter’s close proximity to Africa.

The new partnership was ventured between Vito Capital Fund from Israel together with Mr Odreke and his wife Patience Rwabwogo.

The venture is ranged to produce 100.000 litres of milk products using quality technology to ensure best quality dairy products that will include different flavours like yogurt and UHT (powered) milk among others.

Targeting both local and regional markets while employing 70 direct workers and 100 workers indirectly.

During the ceremony that took place in Rushere town Kiruhura district, Ankole sub-region, president Museveni noted that African Continent is very rich but her people still live in the pre-money economy.

“Africa is very rich, but we are living in a pre-capitalist’ society.”

President Museveni noted that since 1986, up to date he has been trying to sensitize the masses in Uganda about the importance of embracing the money economy to enable income generation in homesteads, grow rich and raise their family’s necessities.

“Those are problems I found here in 1986, when I came to sensitize them, they were living in what we call subsistence farming. They farm not for the market.”

He added that he had been battling with the issue of educating the community on choosing what profitable enterprise they would have to undertake, but later opted dairy farming which fitted well the people of the area.

Nevertheless, President Museveni thanked Mr Ethian Stibe the main investor of Vita Tomosi Capital Fund for partnering with Odreke Lwabwogo and his wife Patience in setting up this milk processing plant in the country.

“I thanked Lwabwogo for linking up with you and I think I will thank you for believing them and coming. Israel is near Africa, and we can do a lot of collaborations in very many areas including agro processing.”

In addition, Museveni said that; “I am pleased to see such partnerships and hope that more of the same can be fostered in different parts of the country, especially with focus on value addition to agriculture.”

Museveni further requested the people of the area to embrace the venture and diversify dairy farming with food production to boost their household income.

Meanwhile, Hon Fred Mwesigye the area MP thanked the president for enabling the transformation of Uganda by ensuring peace and advancing developmental programmes resulting in many industries spread widely in several parts of the country.

Mr Ethian Stibe the main investor in the plant commended the president Museveni and the NRM government for the conducive investment environment that is tailored for the economic liberation particularly Uganda and Africa in general.

While Mr Odreke Lwabwogo thanked God for disclosing him the idea.

He also commended the president for guiding and supporting the youth in the fight against poverty.

Setting aside the milk processing plant, the Rwabwogo family also plan to set up a meat processing plant arranged to kick off in June, in Nsara 30kms away from Vito Tomosi milk plant in Rushere Kiruhura District Ankole region.

Which is expected to attract international markets including China.