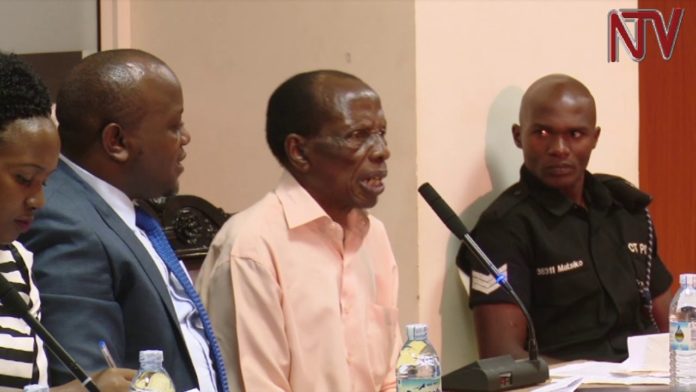 The case was filed by Prince Wasajja a son to SSekabaka Sir Edward Mutesa. Wasajja claims that Kasasa obtained his father’s land fraudulently.

The 87-year-old Kasasa, before giving his defence told the commission that he legally owns the land and he has valid land titles on Mutugo land for over 40years now.

In addition, he said Wasajja has tarnished his name and he wants him to apologise for the damages caused.

After this statement, the commission asked him to clearly tell how he obtained the Mutungo hill land but instead he pushed the question to his lawyer to help him explain.

He said that Lake View properties transferred the 60 land tittles to him after becoming indebted, but Kasasa did not own any document indicating shs1m payment to lake view for the land acquired.

Claiming that his lawyer was accountable for the transfer of land tittles and signatures while he had remained at his shop along Kampala road before he went to withdraw the money.

However, Kasasa was asked whether he knew that the company selling him the land had announced its closure two days before in 1978.

In his response, Kasasa stated that a company can still sale it’s properties even when it’s winding up.

Kasasa in the year 2000, reported a case of stolen land titles to the registrar of lands and requested for a special land tittle.

But he was given a land tittle that did not capture the transfers made between Kasasa and Lake View company limited.

According to Kasasa he is still the bonafide owner of the land even if all the 60 tittles were sub-divided into several smaller plots of land.

His explanation on the varying dates during the purchase of the land contradicted those provided in land registration in the year 1978s & 1980s where the date of survey looked the same as that on acquisition.

Meanwhile, Kasasa refused to disclose the people who were involved in this fraud when Justice Catherine Bamugemereire tasked him to do so.

“Something you want to tell the commission in private,” Bamugemereire inquired.

And Kasasa answered that “I could but I don’t want to jeopardise my life.”

Bamugemereire however, reprehended the indemnity happening in the Uganda land commission.

Kasasa further informed the commission that another account was opened up in his name and 1bnshs was deposited in but he did not receive the money.

This followed Prince Wasajja Kintu’s complaint to the land inquiry expressing discontent on how Dr Kasasa was paid over shs2bn for the sale of Mutungo hill land.