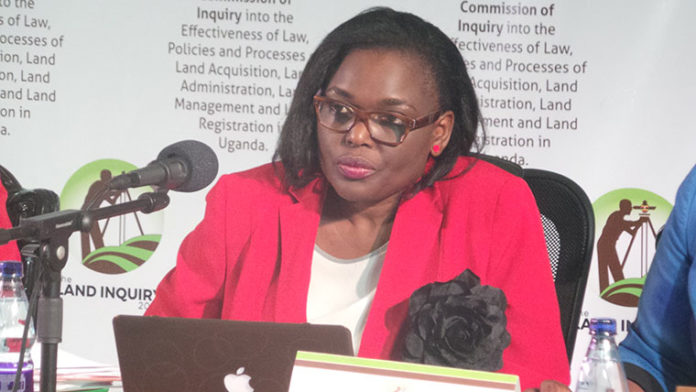 Prince David Wasajja one of the three administrators of the estate of Sekabaka Edward Mutesa II appeared before the land inquiry to question payment of 2.4bnshs by the Uganda Land Commission to Dr Bule Kasasa Mohammad as compensation of Mutungo hill land.

Wasajja also dismissed claims by Dr Kasasa that he bought the land from Barclays Bank after lake view failed to pay the mortgage.

Wasajja said that Sir Kabaka Mutesa was the original owner of the land after presenting documents indicating that Kabaka Mutesa obtained the land block 397 Mutungo in 1947, and had it registered in his name as private property.

He went ahead to question the originality of a tittle that was registered to his father claiming that; It could have been a planned move to grab the contentious land.

However, the commission questioned how former chief justice Kiwanuka could forge documents.

“You believe that Kiwanuka’s position in this country, the former Chief Justice of Uganda, the first Prime Minister of Uganda, the person who was so close in serving Kabaka, Ssekabaka Mutesa 1 would involve himself in land grabbing?”

It’s alleged that Sir Edward Mutesa gave powers of Attorney to Mumbejja Nalinya Mpologoma who could have sold off the disputed land.

Prince Wassajja however, refuted the submissions saying that;

“These people committed frauds. Now where Mr Kasasa comes in, is that he participated in these frauds. He knew that these people were doing fraud lings and he was buying fraud ling property. So, it was up to him to do the frauds, because they mortgaged the land in 1972.”

Prince Wasajja was also informed that Nalinya Mpologoma and Ben Kiwanuka at one time went and visited Sir Edward Mutesa in Britain, and they could have discussed matters of the sale.

But in defending the royal family, Wasajja dismissed the claim saying that; one Kwemalala Kintu transferred the land to lake view properties limited who later sold the land to Bule Kasasa Muhammad.

It seems that information educating that Bule could have bought the land from Lake View properties is not documented.  This followed Wasajja’s statement when the committee tasked him to provide an explanation.

“What is on paper there is no record of that, because from what we have it looks like Lake View properties paid for the mortgage,” Wasajja stated.

And after Wasajja’s appeal the committee investigating land matter decided to block shs7bn meant to compensate Dr Kasasa for the land government is currently using.

The contested land is now home to the Ministry of Defence headquarters, CMI, ISO, ESO and also home to many locals in Mutungo, Mbuya and Kireka.