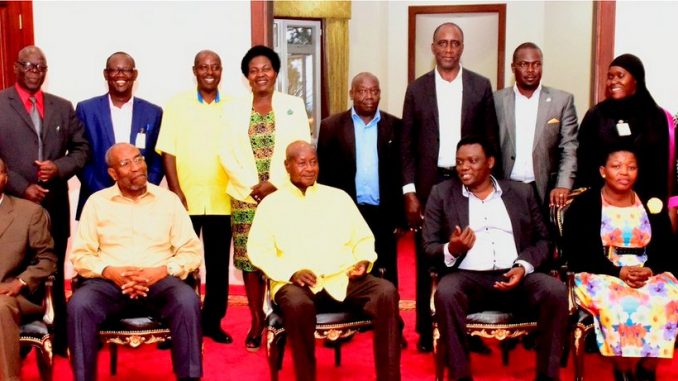 NRM rebel MPs were locked out of the meeting that comes amidst reopened attempts to accord the incumbent the sole candidate status like in the previous polls and also to debate his 2021 advancement plus the party’s election road map.

A meeting was organised and was attended by only members of the influential National Resistance Movement Parliamentary Caucus at State House Entebbe.

The NRM party through its party units have always been filing decisions announcing their party president also the current President of Uganda as their sole candidate in the nearing general elections. As it applied to 2016, general elections.

Solmon Ssilwany, the caucus Vice chairperson parliamentary caucus, explaining the intentions and aims of the meeting saying that;

“we are mainly discussing issues concerning the road map that was released by Electoral Commission.”

Even as the official communication limits the discussion cope, others within the party admit that the debate is about changing the mode of electing the president and parliamentary system where party with the majority MPs from government will be on table.

“Honourable betty Nambooze and others, am told they had a conference, they brought ideas of how to vote a president. For them they don’t want that the president should be voted by other. We want to look at that if it’s taken by the caucus, then we take.” Mr Ssilwany said.

The meeting was also going to settle issues of Speaker Rebecca Kadaga who contravened president’s wish after passing out judgement that Commissioners of parliament will be elected and phased out as the usual procedure of appointing them.

“Then we will also touch on the issue of commissioners of parliament.”

“Remember this is something we debated fully from promulgation of the constitution 1995, and we choose really the mixed breed presidential and parliamentary which is what we have now. There were reasons for it, so I would like to hear the reasons why NRM would want to revive that debate if their new experiences or new conditions that rotate in visiting that position.”

As the party debates the election road map, a lot of excellent matters stays in the cold with the election reforms ordered by the Supreme Court lowered to the edge.

Partrick Nsamba MP Kasanda North, one of the un invited NRM rebel MPs gives out his view on the take as the 317, MPs who seconded phasing out of the age limit in the constitution sit at the table of power.

“If I was invited I wouldn’t go, because the times I have been there I have been listening to instructions, they don’t even give you time to process what they want. If they were situation in the caucus they give time to process what you want or what they want and you debate it and you agree on it, it will be okay for somebody to go spend time there.”