President Museveni returned this week to deliver the State of the Nation address to Ugandans.

This address appears every year before the budget reading of that financial year and the president addresses the nation about various issues in the country.

READ  Bobi Wine: We Shall Not Allow Museveni to Rig Our Votes in 2021 Elections

The president reminded of the NRM 10 point programme which includes restoration of democracy, restoration of security, consolidation of national unity, the building of an independent economy, cooperation with other African countries and restoration of the economy.

“We continue to face a challenge from enemies within the country that are fighting the independence of our economy,” the President said.

Museveni says the economy is divided into parts; the real economy and the vulnerable economy.

According to the president, the real economy is the most important economy to the citizens since it provides shelter, food, clothing, health, food and more essential services. The sectors that fall under the real economy are; agriculture, ICT, Manufacturing.

Agriculture products generated 2 billion dollars in 2019. Coffee generated 478 million dollars and with the help of NAADS, the production of coffee has increased from 4to 7 million bags.

The fishing sector has generated more than 21 million dollars. The president also says that fish farming can generate more fish than the lakes but he said the sector is still faced with poor fishing methods.

“If we eliminate the cancer of bad fishing by the parasites within our communities the fish farming can generate more fish than the lakes,” Museveni added.

The president also said that the government has put 1000 billion shillings in Uganda Development bank to provide loans to the manufacturing and agriculture sectors.

Museveni also added that a lot of industries have been set up but most of them have been built in wetlands. He said the already constructed industries should stay but NEMA should deny any permission to the new companies seeking permission of building in wetlands.

The ICT is a growing sector and employee’s more than 1.3 million people according to the president.

The vulnerable economy according to Museveni is the economy of leisure and pleasure and it includes bars, tourism, entertainment and this sector will come out strong after the pandemic if we make the real economy strong.

Uganda’s import bill is at 7billion per year and the president says this is caused by the Importation of luxurious products, petroleum, and plastic and rubber products.

“We need to stop importing unnecessary products which can be manufactured from our country to cut off the import bill,” the president said. 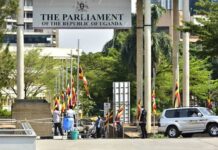