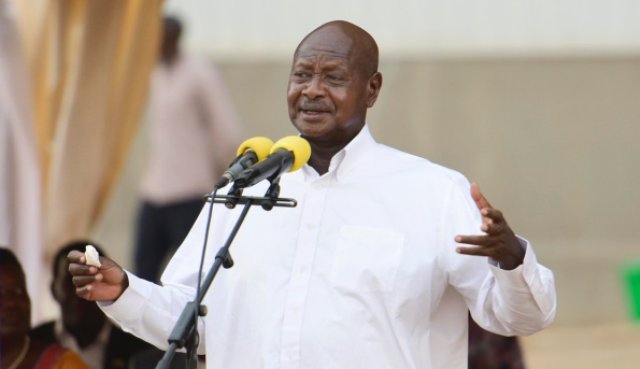 In his latest statement, President Yoweri Museveni has challenged security forces about their methods of work while dealing with protests, saying that harmless civilians should not cause shooting of bullets or teargas.

President Yoweri Museveni says that protesters like the ones involved in the Monday demonstrations were only burning tires and sharing photos on social media to show their funders that “Uganda is not stable” and therefore should have been chased on foot since they didn’t attack anybody, according to the facts the President received.

“I was told that the Kampala demonstrating groups of Monday were more of a nuisance than a menace- which the Arua groups were. The Monday groups were operating in small groups, burning tires and, then, sending them to social media, working for those who pay them, to show that Uganda is unstable. The enemies of Uganda are now worried at the emerging strength of the economy of Uganda,” said president Yoweri Museveni.

The President said the police officers who shot and killed an innocent man in Mityana have been identified and would be punished.

“I must condemn in the strongest terms the shooting by the Police of one of our Bazukulu, Sekiziyivu, who was in a taxi, together with others, going to participate in football matches somewhere else. The Policemen involved will be punished.

He added: “Fortunately, they were identified. It was either panicky actions on their part or even malice, aimed at spoiling the name of the NRM. These people were not part of the rioters in Mityana. Why shoot them? This is very much regretted.”

The President dismissed an explanation given to him about the death of Sekiziyivu.

“In such a situation the issue of stray- bullets does not arrive. A stray- bullet is fired horizontally at a target but misses and hits another person. When you fire up in order to scare, you cannot talk of a stray bullet.”

The statement also discusses the issue of youth unemployment. The President says he has noted the issue of unprincipled politicians taking advantage of unemployed youth to lure them into riots and demonstrations.

“This is something the government is addressing.”

I have read your comments in response to my earlier statement. I thank all of you for giving your views. This is a good and productive way of communicating; no need for violence and “fujo”.

There is, however, one element that people are not bringing out in these comments. This is the issue of the unemployed Bazukulu in the towns and villages. It is one of the elements, in fact the main element, the unprincipled politicians cynically (concerned only with one’s own interests and typically disregarding accepted standards in order to achieve them) use to lure our youth into demonstrations and riots.

Our unemployed youth are a problem but a good one given that we have already laid the basis for resolving unemployment through the economic recovery program ever since 1987. What proof do I have? Look at our import bill of US$5bn per annum. The other day, at Kololo, while graduating the 4,000 Bazukulu of my daughter Nakyobe’s girl child skilling program, I gave the list of the hemorrhage (bleeding) of our hard earned dollars importing from outside products that should be made by you, the youth, here. Some of the items are the following:

With the support of the Government, many youths can get work sites and equipment to make many of those items here- thereby, creating jobs for themselves and for others. I have already shown you how this can be done by supporting the youth and non-youth groups in Katwe (motor-mechanics etc), Nsambya (furniture), Najjera (metal fabrication), Wobulenzi (grain milling and animal feeds mixing), Rukungiri (furniture making, metal fabrication etc), Nakyobe girl child skilling program (shoes making, cloth weaving, knitting, embroidery, confectionery, beautician skills) etc etc. How are those groups doing – well or badly? If they are doing well, for the individuals involved and for the country, then these pilot projects should be turned into a national movement of import- substitution and export promotion.

These types of projects are being done or will be done by our educated youth (scientists), foreign investors or some of our local business people converting from importing to import- substitution and export promotion.

Then there are the really big projects like steel- making (in Tororo), phosphates fertilizers (Tororo), gold refinery (Entebbe), Copper and cobalt processing (Kasese) etc. These can only be done by either the foreign investors or by Government parastatals. All these are already in progress and we now have enough electricity, the roads are being worked on, the railway is planned.

Therefore, the unprincipled politicians who mislead our youth into rioting or actually pay them to riot or to commit arson must be condemned. Also to be criticized are the NRM leaders who do not engage these youth and squander resources in unnecessary foreign travels and other non- priority expenditures.

We now have the money, if prioritization is correct, to launch a serious assault on the poverty and hopelessness that renders our Bazukulu vulnerable to manipulation and exploitation by unprincipled politicians. I have proof of this which I will bring out at the right moment.

There is another area of jobs access which I do not like myself but it is better than nothing as of now- as we organize ourselves better. These are the foreign jobs. The Ministry of Labour is letting us down here by allowing businessmen to exploit our youth by charging each youth between Shs2 and 8million to be allowed to access a job outside. This is too much. I have already picked this up and I will resolve it. I, however, prefer local jobs.

Coming to the responses, therefore, I say the following:

I will get time to respond to their views. I am going to answer some of these comments one by one. I am too ready to engage in the debate. These seem to say that the Government should not take a firm stand on the politically motivated attacks on women, children, adults, damage to property or rape because as Jajja I should ignore those acts. That opinion is wrong. 70% of the registered voters stayed away from voting in Arua because of that violence. A person died in Bugiri and another one died in Arua on account of that. That must stop. We need discipline so that we roll out our well-conceived and already demonstrated strategy of transforming Uganda.

Besides, peace is a right of every Ugandan. You have absolutely no right to trample over my Kiosk, damage my shop or my car or cause damage to my farm because of your political ambitions. Peace is a right and not a favor from anybody. If you want to make a political statement, work with the Police, walk peacefully to an agreed, non- populated point and give your views. In UK, they have Hyde Park. In Uganda, people can use Kololo or other rally points. After the rallies, the organizers should tell the followers to go home peacefully. Is that too much?

I was told that the Kampala demonstrating groups of Monday were more of a nuisance than a menace- which the Arua groups were. The Monday groups were operating in small groups, burning tyres and, then, sending them to social media, working for those who pay them, to show that Uganda is unstable. The enemies of Uganda are now worried at the emerging strength of the economy of Uganda.

The Permanent secretary Ministry of Trade of Kenya , who was here with the Deputy President of Kenya, the other day, told me that for the months of January, February, March, April, and May(2018), Uganda exported more to Kenya than the other way round. The enemies of Uganda are really worried about the growing strength of this economy.

Therefore, our youth groups of Monday were more of a nuisance and psychological warfare than a menace, unless I get new facts. Why then, shoot at them, why fire tear-gas, why fire bullets? Those mobile, tire burning groups, who are not attacking anybody, should simply be chased on foot, identified from light helicopters (206- Agusto type) or UAUs, arrested and be charged with appropriate offences. In such a situation the issue of stray- bullets does not arrive. A stray- bullet is fired horizontally at a target but misses and hits another person. When you fire up in order to scare, you cannot talk of a stray bullet. By the time the bullet falls back on the ground it will be like a stone. I doubt that it can kill. Unless I get new facts, I provisionally, condemn that act and demand investigations into the circumstances by the Police and other Agencies. The dead person should be identified so that we can assist the family.

On the issue of releasing Bobi Wine and the others, the President of Uganda does not have such powers. Once somebody is arrested, charged and remanded, it is only two authorities who can release such people in any way: the Courts or the DPP withdrawing charges if the evidence is not enough. Let us therefore, wait for the Courts and see what they decide.

Richard Tuwangye mentioned that confronting the rioters may affect Tourism and will give a bad image to Uganda. Yes, in the short-run, it may. However, in the long- run it will pay because opportunists will stop playing around with the stability of the country. Tuwangye’s skepticism about importing voters by the opposition will be reversed once he sees the evidence in Courts.

Finally, the anti-riot SOPs (Standard Operational Procedures) give the whole spectrum of options: warning rioters using loud- speakers, using shields and batons, using tear gas, using rubber bullets, using water – cannons, using rifles but firing in the air and, finally, shooting directly at the rioter in self- defence (for the Security personnel), to stop him harming a mwanainchi or damaging property if they do not pay heed. Therefore, Bazukulu, do not be misled by those who are misusing you that the Security cannot use deadly force. It all depends on the circumstances.