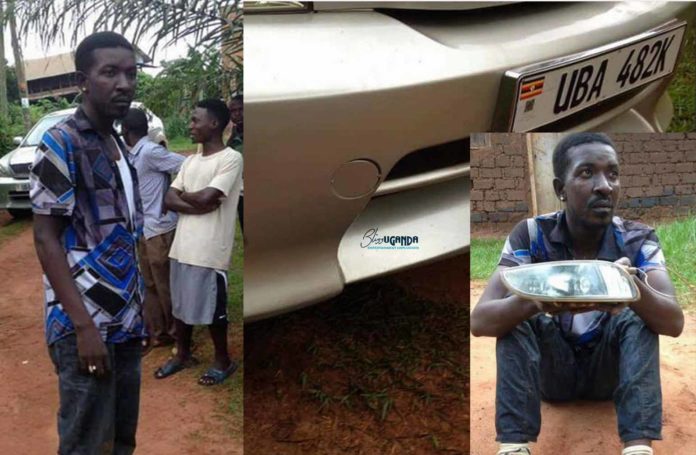 Former popular singer and one of Uganda’s most rated handsome musicians Qute Kaye was in our latest Uganda news this morning caught red handed stealing car headlights from one of the cars in Busega, a Kampala suburb. Pictures of embarrassed “ginkese” hit maker with these headlights went viral all over social media where several individuals have related this to Kaye’s continuous misuse of drugs which even to collapse of music career.

Kaye who once shinned and released several hit songs recently gave up on music and started surviving on drugs and started robbing from local people in Busega and nearby areas. According to Kaye’s friend, the faded singer joined a group of robbers and outcasts who sniff a powder drug which is a bi-product of cocaine locally known as amacwiri. This drug slows down the nervous system more than a thousand times compared to the normal functioning system and it appears to be addictive and dangerous.

Kaye is one of the many artistes who have suffered and fallen victims of drug abuse and these include Jackie Chandiru of the former Blu 3, Keko, Dave Dash among others.

This incident happened just a few months since Kaye declared that he had left every bad habit and gave his life to God at Pr. Robert Kayanja’s popular 77 dog’s event that happens at his church.

Whoever is concerned should rescue the talented Kaye to get back on the track.