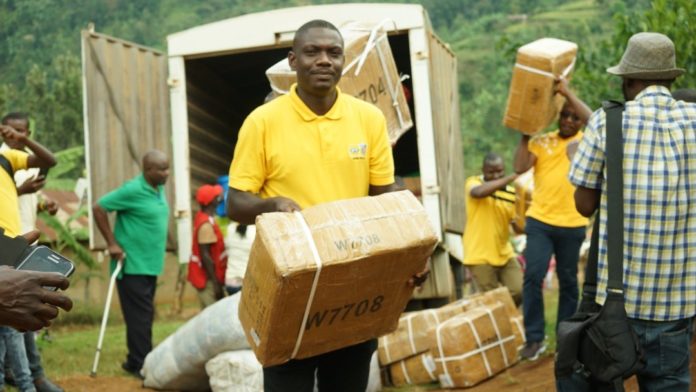 Relief items worth millions of shillings been given out to the recent landslide victims in Bududa Bukalasa sub-county in Bududa District.

Besides, Watikha stated that, they bought these relief items out of the money collected from the charity foot ball match they had on Saturday to help their sisters and brothers suffering in Bududa.

He noted that “We are tired of burying our relatives and friends”, every time as a result of landslides. “I wonder why our government has delayed to relocate to people”, Questions watikkha.

He called upon the government to act immediately as far as relocating the affected people is concerned.

“On behalf of the affected people in this area, we thank ECC for thinking about us and aiding us with relief items”.Shibale also added that “we also request other well wishers to do the same because Bududa people are going hungry without food”.

Finally, he said residents of the affected area are willing to relocate.

In the same way, Mr. Umar Nangoli former RDC Mbale district observed that “the methods used by government last time while relocating the affected people to Kiryandongo was bad”, however, he appealed to the government to carry out a sensitization programs before relocating  them. “We need proper sensitization to tell our people where they’re going instead of forcing them; Nangoli in his view.