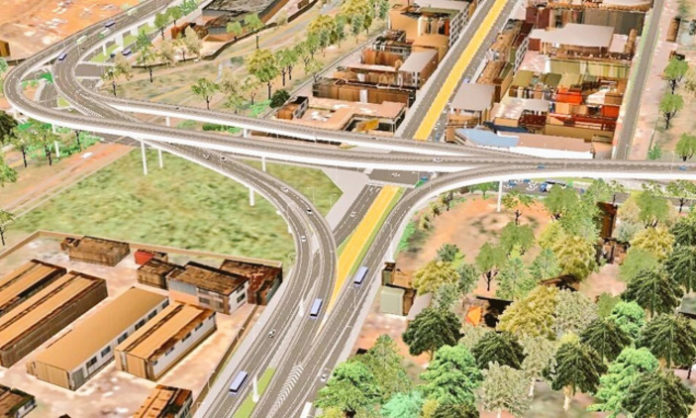 Yesterday at around 11:00am President Yoweri Kaguta Museveni arrived at Nakivubo Blue Primary School to commission the construction of the fly over project funded by the Japanese government.

The 300bn shillings Japanese funded project is aimed at reducing traffic congestion in the city. JICA sponsors the fly over project on untied loan amounting to Yen 199.89m Yen (JPY) at a rate of 0.01% interest annually.

The construction of the project is to be executed in phases.

Phase one commences by upgrading clock tower and Shoprite junction; phase two will run from Nsambya, mukwano and Ggaba while phase three will cover Mukwano through Kitgum house to Jinja road.

However, President Yoweri Kaguta Museveni said that what the government is doing now is to intensify the development of infrastructures in the city of Kampala and to be extended to Jinja, Mbale, Mbarara and Gulu.

He added that traffic congestion will be addressed by getting off heavy cargo off the road through strengthening other means of transport like water and railway.

“When Uganda Kenya railway is ready, getting up to Kisumu. We shall be able to separate cargo from passengers so that cargo uses the train and ship while humans use the road,” president Museveni said.

Similarly, he announced that government is on the phase of eliminating boda bodas in the city Kampala in favour of few cycles, mini buses, buses and institute carriers instead of using bodabodas.

Construction work and supervision consultants for the project Is to be funded and executed by JICA.

H.E Kazuaki Kamed the Japan’s Ambassador to Uganda stated that they have a high commitment to develop better infrastructures in the country.

While Monica Azuba Ntege minister of works appreciated JICA for the support rendered to Uganda and said government and Uganda in particular are very grateful.

And she further stated that, road transport is the major form of transport in Uganda for both good and passengers.

UNRA Board chairperson Fred Jachan Omach said that; for the recent years expanding traffic congestion has been a worry on the city’s road network and had become too much to bear.

Omach noted that, after finalising this grand sky project, movement of people in the city will be improved and the issue of traffic congestion solved.

The project will also involve construction of underpass at Nsambya, refine signalisation of roundabouts and access to roads.