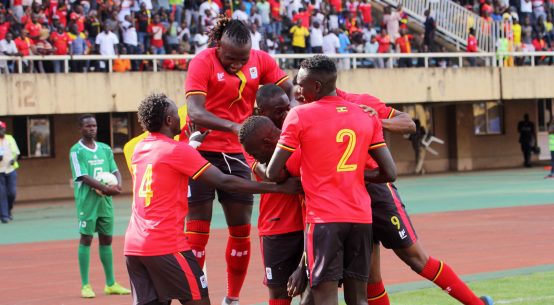 NAMBOOLE – Uganda Cranes moved three points clear at the top of Group L thanks to a 3-0 win over Lesotho on Saturday afternoon. In the game played at Namboole, Emmanuel Okwi struck once in either half coupled by Farooq Miya’s first half penalty to hand Sebastian Desabre his maiden competitive victory.

The Uganda Cranes who had drawn 0-0 in their previous game started strongly with Miya shooting over from just outside the area after he was teed up by Joseph Ochaya.

Lesotho who started while pegged-back in their own half resorted to counter attacks and could easily have taken the lead in the eighth minute only for Hlompho Kalake to shoot straight at Khalid Aucho after Denis Onyango had been left stranded following an uncharacteristic error by the Cranes captain.

The early pressure on Lesotho finally paid off three minutes later when Emmanuel Okwi received a routine ball on the right, dribbled past two defenders before unleashing a fierce left-footed shot into the top left corner to make it 1-0 to the home side.

With the Cranes looking relaxed after the early goal, they were lucky not to concede an equalizer on 14 minutes. Kalake beat the offside trap and found himself running through on goal but could not square the ball to Sera Motebang who was unmarked in the area as Uganda managed to clear their lines.

With 19 minutes to played, debutant Edrisa Lubega was played in on goal by Miya but the Austrian based striker could only shoot weakly at Mohau Kuenane in Lesotho’s goal.

Moments later, Lubega had a chance to make amends for his earlier miss but could only look on as the referee waved away his penalty claim after he was shoved in the back by Tumelo Khutlang while controlling Ochaya’s lobbed pass inside the area.

Just past the half hour mark, Lesotho failed to capitalize on lazy defending by Denis Iguma as Khutlang shot tamely at Onyango while one on one with the custodian.

With seven minutes of the first half to play, Okwi was brought down inside the area and Uganda was awarded a penalty. Miya sent Kuenane the wrong way to make it 2-0 to Sebastian Desabre’s men and ensure they go into half time with a healthy lead.

At the start of the second half, Lesotho made two substitutions with Kopano Tseka and Masoabi Nkoto coming on for Jane Ntso and Mabuti Potloane respectively in an effort to pile pressure on Uganda but like it was in the first half, Uganda started the last 45 minutes brightly with Lubega setting up Okwi who sliced his effort out for a goal kick while inside the penalty area.

In an effort to see out the game, Desabre made his first substitution of the game, taking off Ochaya and introducing Saddam Juma in order consolidate the middle.

Three minutes after the hour mark, the Uganda Cranes sealed the result. Moses Waiswa sent Lubega on his way who in turn crossed for Okwi to node past Kuename for 3-0.

Lesotho’s first sight of goal in the final half came with 23 minutes to play when Kalake’s fierce drive was deflected over for a corner by Aucho. The resulting kick was headed just over by defender Basia Makape, much to the disappointment of the Crocodiles.

Three minutes later, Uganda made their second substitution as Patrick Kaddu replaced Lubega who had had a descent display on his debut.

Kaddu who had been on the pitch barely five minutes could have increased Uganda’s lead to four but could only head wide a Saddam Juma speculative long ball.

The Crane’s final substitution saw left back Isaac Muleme come on for the tired Waiswa and nearly made instant impact when he crossed for Kaddu who again headed wide of the target.

With limited goal mouth activity in the three added minutes, Uganda saw out the game for their second victory of the campaign.

For Lesotho, they now sit third on the log with two points from three games.

The two sides will again face off on Tuesday in Maseru.

The Cranes starting IX vs Lesotho: