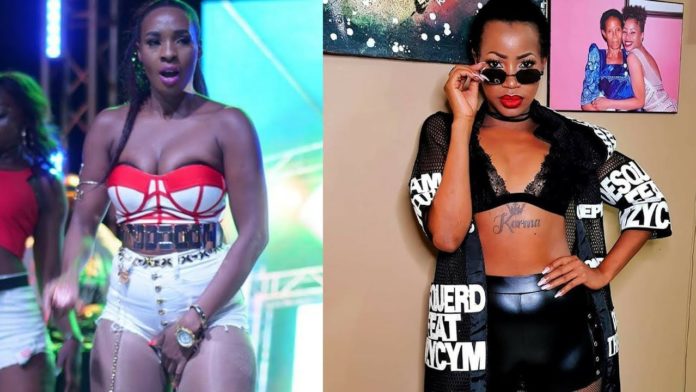 Who Wins Between Queen Sheebah and the King Herself Cindy Music Battle?

In the past years, Uganda witnessed and embraced music battles from bigwig artistes like Radio and Weasel Vs Bebe cool, Bobi wine Vs Bebe cool and also that of Jamaican singers Busy Signal and Koshens where artists perform for their artistes and make a conclusion on who is bigger than the other.

This year a music battle between top female dancehall artistes in Uganda is inevitable.

The past two weeks, dancehall female singers Cindarella Ssanyu formerly at Blu 3 and Team No Sleep’s Sheebah Karungi have dominated the airwaves and social media when Cindy attacked Sheebah and referred to her as a dummy who cannot sing her own music or stage a successful live performance hence daring for a battle.

This came after close to two years since the two started bragging to be the best and which tempted Cindy to nickname herself King contrary to Queen Sheebah.

However much Cindy has been quietly away from the music scene for some time with a few hit songs, she has mastered live performances and she is rated as one of the best live performers in the land hence beating Sheebah hands down who is a ‘CD’ performer.

For some time Cindy has stomped on stages with ferocity, left a huge impression for her fans while Sheebah has dropped monster hit songs like Wankona, Beera Nange, Wadawa, Ice cream, Bamusakata among several others.

Sheebah has dominated local awards like Zzina and HiPipo Music awards where she has been recognized as artiste of the year for 3 consecutive years.

But again, the queen herself summarized all those accolades by Sheebah by winning a continental Afrimma Award recently.

In a few sentences, our reporter Paul Wetaase summarizes the similarities, differences, abilities of each individual and who is likely to win the battle if it is held this year.

First of all, Sheebah and Cindy are one of Uganda’s most talented singers, great stage performers, designers and audience movers who have dominated the industry for close to ten years with several hit songs.

The two have held successful music shows and have also had successful collaborations with artistes like Ykee Benda, Navio, Chosen Blood, Bobi wine, Pallaso, Irene Ntale among others. Their contribution to the growth of the music industry in Uganda will never be underestimated.

The two have the same kind of stage performance normally accompanied by almost ‘naked’ dancers, they almost put on the same outfits and have also performed at the same stages including the famous Comedy Store at UMA Lugogo.

The difference arises in the number of hit songs, successful concerts held, management, onstage performance, live band performance, and may be the properties held which is outside the music business.

Let’s break them down and you will be the judge to determine who wins if the battle is organized and held.

Let’s start with the number of hit songs by each singer.

Here Sheebah Karungi beats Cindy hands down. Sheebah has recorded over 50 hit songs since 2010 while Cindy has utmost 10 hit songs. Queen Karma has been one prolific musicians in the past three years with so many hits to recount and she is on top now.

After Afrigo Band, think Band Cindy. Cindy and her singers who have mastered live band performances and have performed at several hotels, clubs, events and so much more.

This is a win for Sheebah Karungi since she has managed to stage successful shows at Hotel Aafricana, Satelitte Beach, Freedom City and her booking fees are higher than those charged by Cindy and her crew.

Sheebah is managed by One of Uganda’s most respected managers Jeff Kiwa at Team No Sleep who has made artistes like Jose Chameleone, Radio and Weasel, Roden Y Kabako, Pallaso, AK47 among others while Cindy happens to manage herself which has hindered her deep penetration to the masses.

However much Sheebah was once a dancer; I believe that Cindy is a better performer with extremely organized performances, dance moves, experienced and well-dressed dancers. Unlike Sheebah, Cindy knows how to command and direct her team and hence a win for her.

This is the hardest part to choose better than the other. The two singers are great designers with outfits that match with their beautiful and curvy bodies. The two show off meat with their tiny dresses and therefore I decide to go for a draw between the two.

You should all agree with me that Cindy is extremely more talented and a better vocalist than Sheebah, her only problem is lack of a proper and well organized team. From the days of Blu 3, Cindy has proved to be a great singer.

Sheebah is as well a talented singer but with poor vocals and a great management. So this a tick for Cindarella Ssanyu.

We cannot discuss everything here, but if any promoter brings the two camps together for a battle this will be one of the greatest music shows of our time.

Wish you well Queen Karma and the King herself.