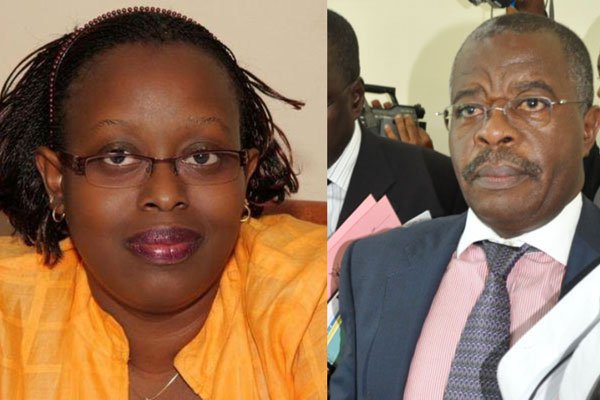 The call by these Women Activists was made Monday morning as the group staged at Chapter four offices in Kampala demanding resignation of Gashabirike to pave way for investigation into the allegations.

The two women group activists however, lauded Mwesigye for standing against sexual harassments at work places stating that her courage is going to empower many girls and women going through the same to rise up and demand protected work stations as regards to sexual harassments.

“Laws on sexual harassment in Uganda are not effectively implemented thereby creating a culture of impunity since perpetrators are rarely held to account. As a result, female employers’ prefer to remain silent and are forced to work in hostile and humiliating environment consequently impacting on their work productivity and undermining their psychological and physical wellbeing,” Wanyana said.

Wanyana continued to state that all attempts by Mwesigye filing the case to the Solicitor General, Attorney General and his Deputy, IGG and the Prime Minister was reluctantly received and all of them paid little attention to the matter.

Sarah Bireete, the Executive Director for the Centre of Constitutional Governance urged ministry of Justice and Constitutional Affairs to Institute zero tolerance policy in all work stations on sexual harassment.

Mwesigye early this month said that she was sexually harassed by Christopher Gashabirike, the Deputy Solicitor General for more than 10 years at the time he served at the ministry of Health as the Senior State Attorney.

In December 2018, Mwesigye said she filed a complaint at the ministry of Justice but she was not attended to, and later on she informed the Prime Minister Dr Ruhakana Rugunda through WhatsApp.

Francis Atoke, the solicitor General, last week revealed that all attempts are being carried out by the ministry of Justice to ensure that justice prevails.