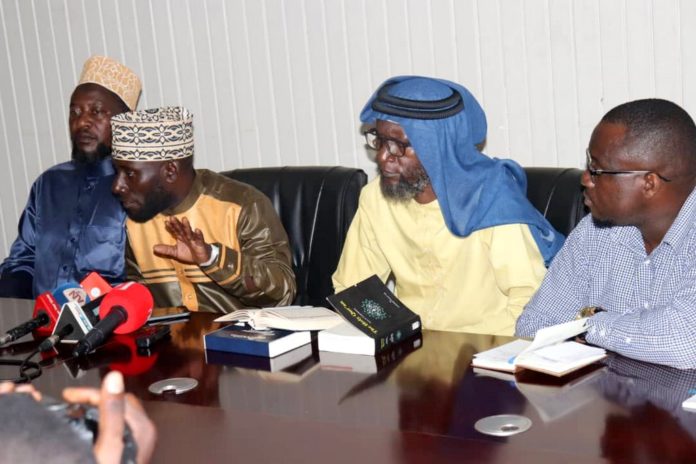 Muslim Clerics Sheikh Ismail Ssentongo, Muhammad Kalodo, Musa Isa Mubiru and Yusuf Ssentamu were in 2015 arrested and charged for terrorism and murder of sheikhs. Mustafa Bahiga and Hassan Kirya are demanding compensation and an apology over wrongful arrest and prosecution. These were found not guilty in 2017 by the International Crimes Division of the High Court on grounds that the DPP lacked evidence.

Addressing the press on Friday, the clerics accused the DPP of sanctioning the charges without carrying out thorough investigations. They are also demanding 14.5 billion shillings as compensation for the loss of their businesses in the United Arab Emirates

The Muslims now want Mike Chibita, the DPP to apologize within seven days and compensate them for malicious prosecution or else will commence legal action.

The sheiks say that they were tailoring school uniforms and other businesses in Dubai. Ssentamu narrated how they were arrested in Deira Dubai by Dubai police officers on the orders of Ugandan Police Officers Nixon Agasirwe and Fred Tumuhairwe. Agasirwe is currently in detention at Makindye Military Barracks on charges of kidnap.

According to Ssentamu, they were forcefully evacuated through the private wing of Abu Dhabi airport by Agaswire and Tumuhairwe onto a private royal jet which landed at Jomo Kenyatta International Airport.

From JKIA, a Fokker Plane airlifted them from Nairobi and landed at Entebbe International Airport. Through their lawyers Muwema and Company Advocates, the Sheiks plan to institute a case against the Government of United Arab Emirates for illegally handing them over to the Ugandan government.