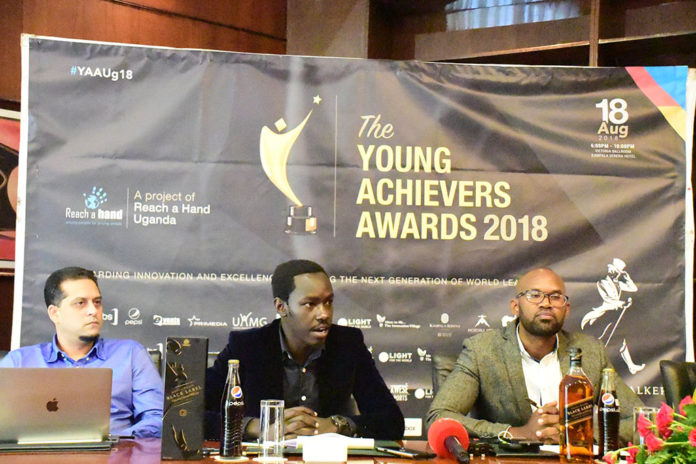 With a month away to the Young Achievers Awards (YAA) gala night, 300 applicants have their fingers crossed, praying they make it on the list of nominees from which finalists will be chosen come August 18th.

To make the gala night happen, premium whisky Johnnie Walker has announced its partnership with YAA organizers together with Reach A Hand Uganda (RAHU), boosting preparations with Shs80m.

Speaking at a press briefing, Roger Agamba, the International Premium Sports brand manager at Uganda Breweries Limited (UBL), said being part of YAA fits to motivate the next generation of leaders through young achievers’ stories of passion, resilience and positivity powered by humanity’s strong will to progress onto the path of achieving greatness.

Humphrey Nabimanya, Team Leader at RAHU Uganda commended the partnership with the premier whisky and applauded the strategy aimed at creating platforms that not only appeal to young people but have lasting impact.

The awards platform is designed to celebrate the achievements of youthful Ugandans who have excelled in the realms of the arts, entrepreneurship, media and journalism, philanthropy, innovation and sports.

Last year’s winner Mohammed Kisirisa who took home the accolade for the Social Entrepreneurship, as a result got scholarship to Oxford University to pitch his project.

Ibrahim Waiswa Batambuze, the Communications and Advocacy Manager  RAHU, said that they are improving some categories in the awards, for example the ‘Music’ category which has been renamed to ‘performing arts’ category in order to accommodate more arts platforms like dance, the spoken word (poetry) and instrumentation.

Agamba congratulates Young Achievers Awards for the resilience to exist beyond one year in which many businesses and innovations collapse, adding that as a brand, they exist to inspire personal progress which is in tandem with their ‘Keep Walking Uganda’ campaign.

“We are happy to have supported the YAA right from their inception because the current Team Leader, Humphrey Nabimanya has worked with us right from his younger years. We are not surprised that he has been a recipient of the awards and now an organizer. We have supported him and will keep supporting him. There are so many innovations coming up and we encourage young people to take them up,” Greggy Busolo, brand manager of Next Media Services under which NBS Television is managed, explained. The final list of nominees for the YAA will be announced early next month.