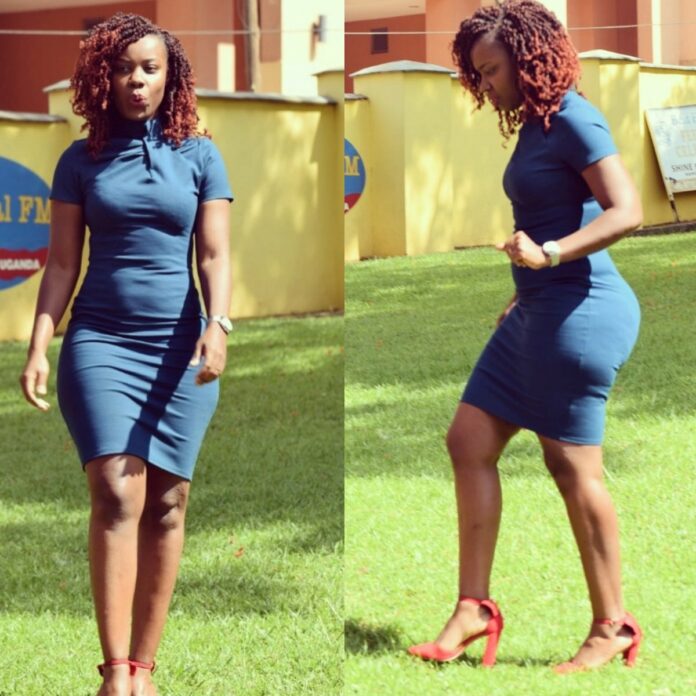 Lucky Rahma Mbabazi is a Ugandan radio and television presenter who has been one of the longest-serving journalists in the country.

Lucky Mbabazi real names Lucky Rahma Mbabazi is traditionally married to Patrick Kanyomozi who was her workmate at KFM, a one local radio station in Uganda. They have two children together.

Lucky Mbabazi works on Capital FM as the host for the morning show with Gaetano Kaggwa and also hosts the overdrive show every afternoon of the week alongside Patrick Idringi who is commonly known as comedian Salvador.

Beginning her working career, Lucky started working at KFM operating at 93.3 FM, a local radio station owned by the Monitor publications limited before in 2013, she joined Capital FM which operates at 91.3 FM.

Her top stories and how she came to limelight

Aside from being a known radio presenter, Lucky is most known by most people for her activeness on social media where she always posts recorded videos of herself in studio dancing with Gaetano Kaggwa to a particular song every day during their morning show.

Her attractive body and curves including the hips, also have made it hard for most men to scroll down their Facebook pages minus clicking to watch her videos. She is as well known for using her page to always communicate and respond to any criticism aimed towards her.

Earlier this year, through her social media platform, she rubbished allegations of wearing artificial bums pinpointing that those who claim so are big-time haters.

In her statement, Lucky said that she has never visited FACCO, a known body part enlarging clinic in Kampala in the name of adding weight to her behind.

‘’Those who studied with me, know exactly how my booty looked like while in school. I have seen people say I wear fake bum. That is absolutely wrong. I am a mother. I respect who I am and I am very proud of myself and I cannot go this low. I just manage my diet and work out,’’ Lucky’s statement read then.

This year, Lucky also came out through her usual page and warned all people to desist from posting her pictures and all sorts of information accusing her of being non-Muslim.

Lucky’s Groove Back is an exercise event where various fitness coaches come up to take various participants through aerobics and other ‘Yoga’ classes. Lucky usually hosts this fitness event multiple times in a single year.

Following her most one this year that happened at the Kampala Capital City Authority (KCCA) grounds in Lugogo, she said that she will be looking to holding more aerobics classes at least once every three months.