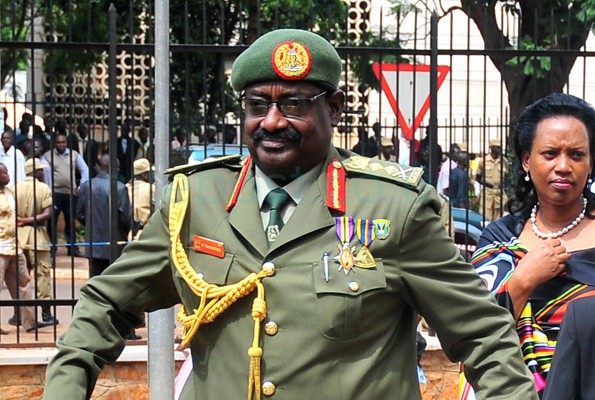 Uganda People’s Defence Forces (UPDF) have deleted Gen David Sejusa Tinyefunza, former Coordinator of Intelligence Agencies from the list of 17 army generals who were approved last year and awaiting retirement that is to be executed next month.

Gen Sejusa was in October named on the list of army officials who were to be discharged from the military service but today his name appears nowhere.

Brig Richard Karemire, the Army spokesperson on Wednesday said that UPDF made changes and Sejusa was deleted from the list of retirement.

“We are a very flexible institution and change is a factor of life. When those factors come in, we respond to them accordingly,” Brig Karemire stated.

A retirement training by the UPDF of over 1,400 soldiers plus 17 generals is ongoing for the next financial year.

Gen Sejusa’s retirement application has been facing rejection ever since he started applying for it, the first one was in 1996.

Sejusa served in the Uganda Army for 37 years but still UPDF has refused to grant him retirement.

According to Brig. Karemire, the Army will determine Sejusa’s retirement.

“At an appropriate time, he will be honourably retired by the institution of the UPDF,” Karemire stated.

Sejusa resigned from the Army service in 1996, stating that top Army officials harass and intimidate him from the time he opened up to parliament that the army had failed to end the Lord’s Resistance Army insurgency in Northern Uganda.

According to Sejusa it was the Army’s mistake that made LRA prevail in the North.

After Sejusa’s statement he made before parliament, High Command summoned him but he hurried to pronounce his resignation in fear of harassment by the Army over his statement.

But later he lost the case after government appealed to the Supreme Court which dismissed his resignation in a majority ruling, stating that he was a servant in the military force.

After this verdict, Sejusa was then re-joined into the army and appointed Coordinator of Intelligence Service, a position he served in until 2013 when he developed issued with government once again.

Sejusa wrote a letter requesting Brig Ronnie Balya, Director of Internal Security Organisation to investigate the message that said that there were plans to kill some top officials in government who do not agree with Gen Muhoozi’s project.

It’s was said that this was a project where president Museveni planned to raise his son Gen Muhoozi Kainerugaba as his successor.

Sejusa had to leave the country, he stayed in exile in London for two years but in 2014 he returned to Uganda. He applied again for retirement and again his application was turned down.

He petitioned High Court, stating that he had been constructively retired after the army withdrew everything he is entitled to as an army officer, but all was in vain.

Gen David Muhoozi, the Chief of Defence Forces, announced the second batch of Soldiers meant to retire in Jinja at Gadaffi Barracks.

In his remarks, Gen David Muhoozi said that when soldiers are informed early as regards to their retirement, they get ample time to adjust to civilian lifestyle.

The first batch of 800 soldiers meant for retirement will be discharged in July 2019.

Among the 28 soldiers who trained with President Museveni in 1976 in Mozabique to fight Amin, Gen Koreta is one of the surviving four soldiers.