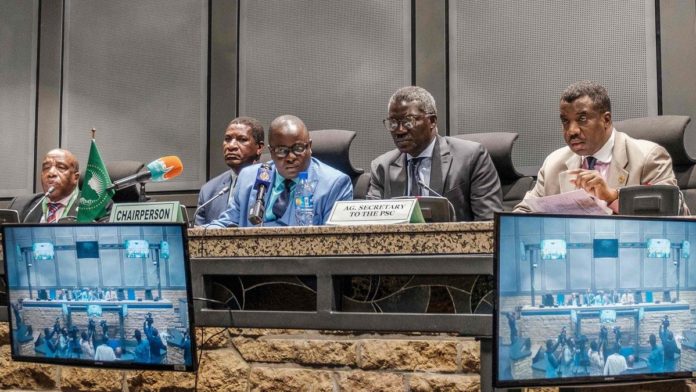 Sudan has been suspended from the African Union (AU) due to the continued political unrests prevailing in the country. African Union in the message delivered on Thursday 6th of June 2018 seek a “civilian-led transitional authority” as a remedy to the ongoing bloody crisis in Sudan.

The AU declaration followed Monday repression on protestors who gathered in Sudan capital Khartoum besides the Army headquarters.

Reports from Sudanese authorities state that after security crackdown on protestors, many civilians lost lives.

Nonetheless, a section of Doctors from the opposition on Wednesday said that 40 dead bodies were recovered from river Nile rising the death toll to 108.

“The AU Peace and Security Council has with immediate effect suspended the participation of the Republic of Sudan in all AU activities until the effective establishment of a Civilian-led Transitional Authority, as the only way to allow the Sudan to exit from the current crisis,” AU statement posted on their twitter account.

Chairperson AU’s Peace and Security Council, Patrick Kapuwa, said that military has refused to transfer power to civilians as demanded, after the long serving Sudan president Omar al-Bashir was overthrown in April 2019.

“Council will automatically impose punitive measures on individuals and entities that have obstructed the establishment of civilian-led authority,” Kapuwa stated.

Ever since Bashir’s overthrow, protestors refused to end protests not until military hands over power to civilians, backed by AU.

Before AU effected the suspension, they issued a warning earlier in May to the Sudan Military government to ensure a peaceful transition of power to civilians or else face suspension. A deadline of 60 days was given.

This suspension was accelerated by the Sudan brutality on the protestors that made Britain, US and United Nations to demand its suspension.