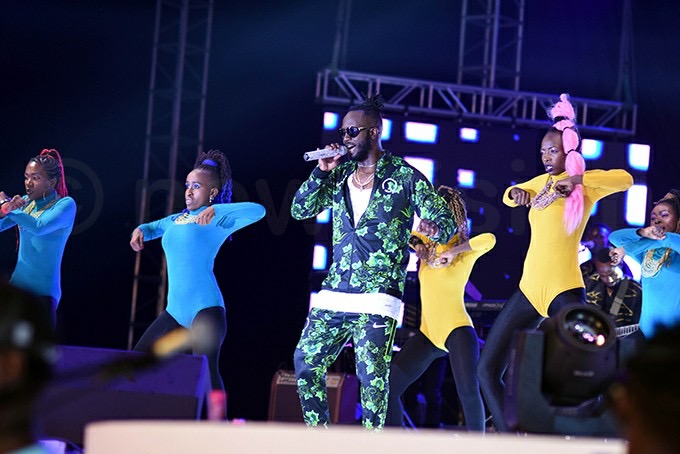 After winning Best male artiste of the year East Africa in Afrimma awards that happened weeks ago in Accra Ghana, dancehall artiste Moses Ssali alias Bebe cool has confirmed that he will resuming with public performances to entertain his fans.

It should be remembered that singer Bebe cool was abused and sent off stage with bottles of urine at the Swangz Avenue 10 year celebrations at Lugogo Cricket Oval in Kampala by nemesis supporters of Bobi wine who are affiliated to the people power movement. For four months now, Bebe cool has not performed at any show or concert due to fear for his life. But yesterday on his return from USA where he had gone to shoot his wasibuka wa video with video producer Sasha Vybz, the kamwako singer told the media that he is not threatened by any insults from the people and his fans should expect him soon.

Bebe cool confirmed that he will also be performing at his show tondeeka e kiwatule that will happen on the 26th December 2018 in Kampala.

In the same spirit, Bebe cool has been praised for his high quality video which has left social media personalities, bloggers and media personalities praising his works. He is known for being a big budget spender most especially in his music video. Bebe cool also looks at establishing a big audio and video production company in Uganda.

“I have always wanted to put up the best music studios and editing suites, with the latest technology and updated programs to enable Uganda to always competition a fair music grounds with the world. Not only latest equipment and technology but I had to retrain director Sasha Vybz for a while to also gain more knowledge about visuals/videos editing because it’s no use to acquire such equipment without knowing how it operates” he wrote

It’s not yet clear whether the legendary singer will be allowed to perform after his insults against the people power movement.