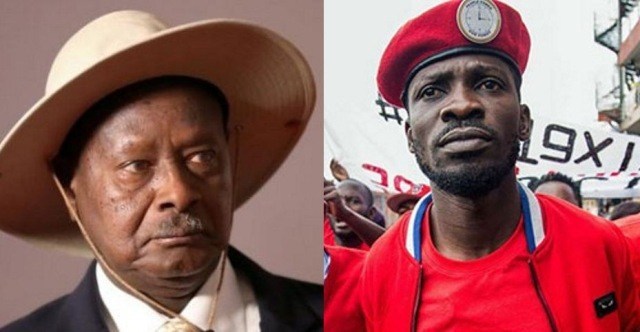 Robert Kyagulanyi aka Bobi Wine, the Kyadondo East Legislator and a renowned musician has fired back at president Yoweri Kaguta Museveni, after yesterday’s statement he issued regarding public assemblies.

President Museveni, on Sunday 5 May 2019, issued a statement on his social media platforms, condemning the way police handled Bobi Wine in his recent arrest including gaving out guidelines on how to arrange lawful assemblies to politicians.

Museveni said politicians should make sure that they make ‘legitimate assemblies’, after getting clearance from relevant authorities.

“It’s such a shame that you send criminals in police uniforms to commit crimes against citizens, but you come out verbally criticise them but still take no action,” Bobi Wine said.

He says each time he calls Mr Museveni the president of Uganda, many of his fans find it offensive, because of the much trust they lost from president Museveni.

Bobi Wine however, says he will continue to address him ‘president’ because of the respect he has for elders and president Museveni is one of them.

“We have nothing against you as an individual. We have everything against how you have mismanaged and continue to mismanage the affairs of our country.”

“In addressing you with respect, we make it clear your attempt has fallen flat. Your actions however, brutal, will not divert us from our course of action. The atrocities the president commits against those who criticise him are a deliberate act intended to make them bitter people.”

He continued to state that president Museveni is betraying the blood of the people who sacrificed their lives for Museveni to take up the presidential seat.

“You have chosen to completely betray their blood.” Even the veterans of war are unhappy of this leadership. For example, Gen Ssejjusa and Sargent Kifulugunyu the late.

Bobi Wine says when he was sick, he was taken to hospital using a wheel barrow, because there were no ambulances. He also said that the war veterans state that they did not fight the bush war to raise Museveni King of this country.