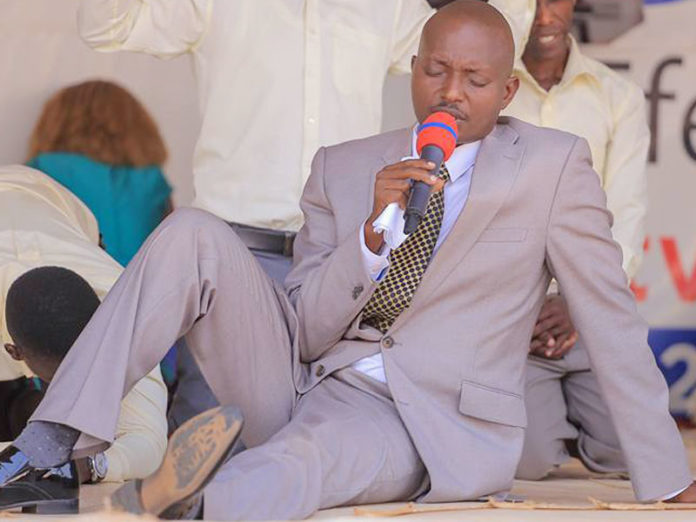 Sources close to Pastor Bugingo say in August 2019, pastor Bugingo will be conducting an Introduction ceremony with Susan Makula Nantaba his new girl who also happens to be a church member and a senior staff at Salt Media.

Few days back, Pastor Bugingo’s estranged marriage made headlines after his wife Teddy Naluswa opened it up that he was trying to force her sign divorce papers after 29 years of marriage.

She continued to say that; “During a family meeting recently, he told our (four) children that he’s no longer my husband but would continue supporting the kids.”

Naluswa says she has been quite all this while but she was forced to open up to the public following her husband’s false accusations against her and their 27-year-old daughter Doreen Gift Bugingo that they were attempting to steal and sell the church land on which HPMI sits.

She also said that she contacted several church leaders and elders including police to find a way of saving her marriage.

“I reported to police after uninvited people started visiting my home in Kajansi. I filed a police report just in case something happened to me and my daughter.”

However, Naluswa on Saturday was cited at Rubaga Miracle Centre Church receiving prayers from the church congregation to restore her marriage.

This comes after Bugingo attacked Jessica Kayanja wife to Pastor Robert Kayanja of Rubaga Miracle Centre for allegedly involving herself in his family matters she doesn’t understand. He however, went further to describe her as “arrogant”.

“Never involve yourself in issues you don’t understand with ignorance. I have never sat you down to tell you my family issues, a symbol which shows that we have nothing in common thought (we are) not enemies. We have never stepped in your church, so if Teddy came to you then advise her wisely.”

It’s also reported that Pr. Bugingo as the struggle in his family continues, he petitioned Uganda Registration Service Bureau (URSB) to change most of the properties he registered with his wife and daughter Doreen.

Pastor apologies to the Nation

“I grew up in a family of married people. My father and mother too were married. In such pastoralist families, they usually had old sticks which they kept, not for rearing cows, but to take care of children and wives. But I never heard my (foster) mother Bereta, even once talking about this among neighbours. Therefore, for my foster family and my parents, both of which families I respect a lot, I want to apologise to the nation. God raised me from the dunghill. He who brought my name from there, I will not do anything that will tarnish the name he gave me.”

“I also apologise to the men and women who are hurting and those who are here, who suffered through last week having to hear my name over and over. I have children, some of them unknown to you and I am still producing more. And to all those children, in school or unborn, I want to assure you that if I was able to be silent for all those years, from today, I will not say another word that will hurt the future of my own children, my future in-laws, and my grandchildren.”

Pastor Bugingo also said that his family troubles have increased church membership and church fund collection. He says on Friday 3 May they had over 1,300 new members at Canaan and collected 32 million for church construction in the whole week, despite the troubles from his family.