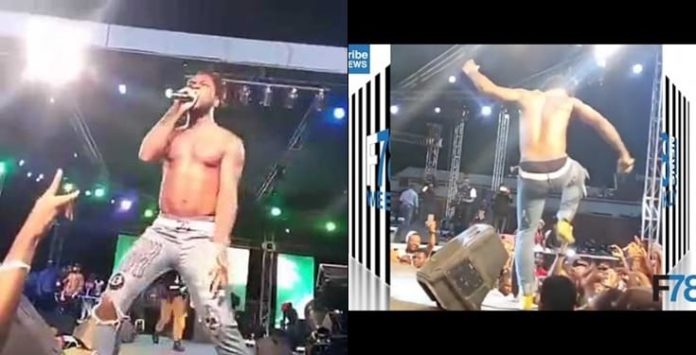 Damini Ogulu, stage name Burna Boy, a Nigerian Afro-Fusion Singer and a song writer, who was in Uganda one week ago filed an apology after he kicked a fan on stage. Burna Boy says the reason behind kicking his fan was that this person was attempting to rob him on stage while performing in Lusaka Zambian capital city.

On his social media platform, Burna Boy says he warned this person but kept a deaf ear. And after few minutes past he had to kick the man, because he was never a fan but someone with an intended mission.

“I am sorry how it looks but this person continues (sic) tried to rob me on stage. It was like the 10th attempt to do it after telling him several times to stop. This wasn’t a fan. Apologies for how it looks but it’s not the case at all. I appreciate all my fans.”

An online video trending on social media, indicated a person’s hand from one of the fans trying to take off Burna’s ring during his performances.