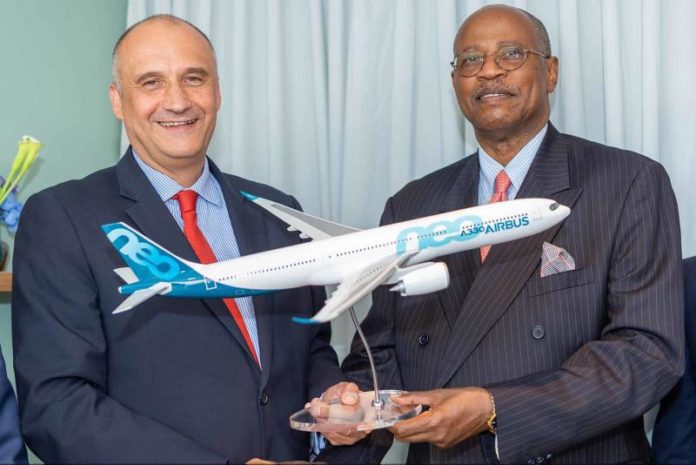 The Uganda National Airlines company will on Monday appear before Civil Aviation Authority (CAA) to prove its capacity to run an airline and defend its application for license in our latest news in Uganda. The Uganda Airlines is among six airline companies that applied for licenses.

Others include Kampala Executive Aviation, Kush Air, Africana International, Kampala Aero Club and Uganda wings Aviation. They will undergo a public hearing before CAA, the regulator of the aviation industry.
The CAA has invited the public to attend and anyone with reasonable ground to object to granting or renewal of an air services license to declare it.  Sources said the Uganda National Airlines has already indicated their will to operate Bombardier CRJ900 and A330-800neo aircraft. The Bombardier jets are manufactured by Canadian Bombardier Aerospace and the A330s by French Airbus.

On Wednesday, a memorandum of understanding was signed between Uganda Airlines Chief Executive Mr. Ephraim Bagenda and Airbus Chief Commercial Officer Eric Schulz in London for supply of two A330-800neo aircraft.
Airbus said in a statement that, Uganda plan to use the A330-800neo jets to “build its international long-haul network.” The aircraft for Uganda Airlines will feature a three-class cabin layout comprising 20 Business, 28 Premium Economy and 213 Economy seats, according to the statement.
“This agreement demonstrates our ambition for economic growth supported by a robust aviation industry. The A330-800neo combines low operating costs, long range flying capability and high levels of comfort. We are looking forward to launch operations and offer our customers best-in-class service,” Uganda Airlines CEO Mr. Bagenda was quoted as saying in the statement.
Both Airbus and Ugandan officials remained tight-lipped on the price of the aircraft.

Daily Monitor asked Airbus’ media relations manager Zaid Al Farah about the price and expected delivery dates for the aircraft in vain.  “Contractual agreements between us and our customers are confidential and delivery dates are customer’s privilege to announce,” he said.
However, a sales statement from the company issued early this year indicates that each A330-800neo costs $259.9m (aboutShs960b). This implies the Uganda government will pay Shs1.9 trillion for the two aircraft ordered.

President Museveni, since his re-election in May 2016, has been hyper about revival of Uganda Airlines after more than 18 years out of service.
During his inaugural address to Cabinet in 2016, Mr. Museveni, termed the lack of a national airline “a big shame,” criticizing Kenyan, Ethiopia and South African “brothers” for ditching the comradeship and instead opting to exploit Ugandans.

The revival plans were then set in motion on recommendations of a joint study by Uganda Development Corporation and National Planning Authority (NPA). NPA’s projections were that Shs1.4 trillion would be good enough to get the project off the ground.

The NPA also recommended that government borrows money from international creditors at 5 per cent interest per annum repayable between seven to ten years. The money would enable the government acquire Airbus A330 and Bombardier jets.

Works and Transport minister Monica Azuba was not available for comment, but she told journalists in May that they had made an initial cash deposit on four Bombardier planes. Each bombardier jet costs around Shs700b. She also revealed the national carrier will commence operations by December, starting with flights to regional countries.