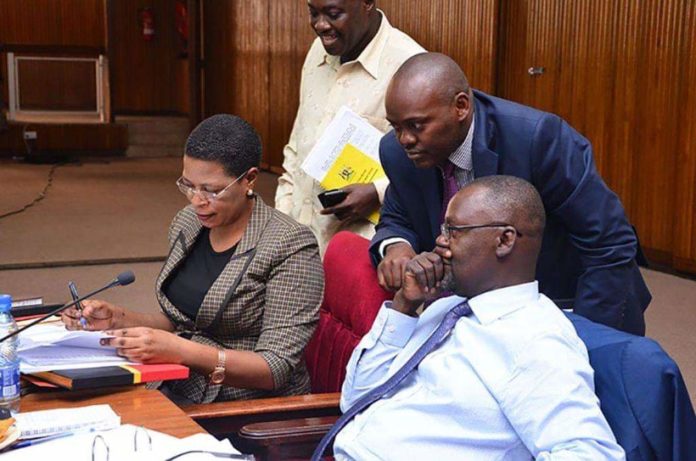 The Inspector of Government (IGG) Irene Mulyagonja, on Wednesday the 27 of February 2019, started an investigation into the reports that saw some legislators on the Committee on Commissions, Statutory Authority and State Enterprises, COSASE getting bribes during Bank of Uganda probe.

In a letter the Inspector General of Government (IGG) Irene Mulyagonja, issued to the Speaker of Parliament, Rebbecca Kadaga, on Wednesday, indicated that her office has instructed the Internal Security Organisation (ISO) to investigate claims that some MPs on COSASE engaged in misconduct during Bank of Uganda inquiry, in the second day running debate on COSASE report.

The letter claims that Committee members received bribes from Sudir Lupareria, who owned Crane Bank and some BoU officials to influence their recommendations in the report.

However, Speaker Rebecca Kadaga, admitted reception of this letter after tabling the matter on the floor of parliament.

“I received a copy of a letter, written by Irene Mulyagonja, the IGG, to the Internal Security Organisation (ISO) asking him to investigate members on the Committee. So, I will give it to the Prime Minister.”

Some legislators said that the letter was intended to actually throw away and tarnish this outstanding board.

“To investigate the conduct of the members on the committee which if you look at, is simply to throw and to pour water on this excellent board that you even agreed with us on. We seek for your indulgency to prevail that the leader of government business should make a pronouncement, should say something about that letter,” one of COSASE committee member petitioned.

After resuming debate on COSASE report some MPs called for punitive action.

“Several times, even when you look at the justice of this report, Madam Speaker we are also lamenting to failure by Bank of Uganda to listen to directorate of parliament and Ministry of Finance,” MP Michael Mawanda said.

Muwanga Kivumbi MP said that Bank of Uganda destroyed all their effort in the struggle for independence as regards to financial institutions in the country.

“In the struggle for independence for BoU, they let down our own struggle by closure of these Banks, everything should have been done to sustain them. Today if you want tot access credit, every Bank you go to is a foreign bank.”

“There was no inventory that was readily availed at the time of liquidation. Because what you could ask Madam Speaker is how possible was it then for BoU to sell something that they could not even effectively a certain its value,” Harbert Ariko MP Soroti Municipality stated.

Dr Ruhakana Rugunda, the Uganda’s Prime Minister, told parliament that government is going to step into the matter to ensure that justice prevails.

“Government of Uganda, cabinet, is going to take up this matter, is going to follow up this issue, is going to get some of the areas further investigated, so, that logical facts can be established and people who are found accountable the law will take its course.”

“I suppose that BoU, Ministry of Finance and Ministry of Trade and Cooperatives to sit together and resolve this matter as quickly as possible and we will have the full support as government in this respect.”

Abdul Katuntu, the former COSASE chair clarified more on the report which is being contested by some parties.

“You see this process leads to four things one- policy reform. Two- legal reforms. Three- improvement of governance at BoU and four accountabilities.”

On Thursday legislators will vote to adopt the report, after considering proposed Amendments by Honourable Members guided by the Speaker of Parliament Kadaga.