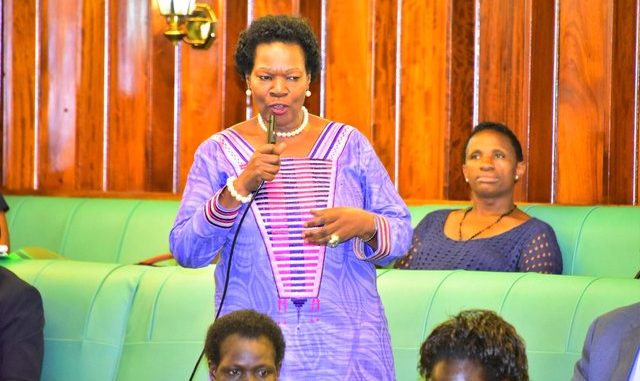 Parliament today resolved to have Maj Gen Matayo Kyaligonza recalled from his Ambassadorial post in Burundi and have his ranks detached.

This came after the Wednesday parliamentary debate over the alleged conduct of Gen Kyaligonza and his two Army bodyguards who appeared in a video manhandling a traffic officer on Sunday the 24 of February 2019.

The video clip that trended on social media platforms, saw Gen Kyaligonza and his body guards manhandling Esther Namaganda, the traffic police officer in Seeta along Kampala-Mukono high way, on their journey to Mukono.

The trouble emerged when Esther Namaganda, ordered Kyaligonza’s driver to stop after making an illegal U-turn in the middle of the road.

Rebecca Kadaga, Speaker of parliament however, requested the internal affairs Minister, Gen Jeje Odongo, Minister Internal Affairs to declare an update on the investigations in yesterday’s the debate on the matter.

“Matayo Kyaligonza has been summoned by the police to make a statement that will be used to process this matter to reach its logical form,” Minister Jejje Odongo stated.

“Assaulted Ministry has not come on the front to defend who beat them, because Hon Jejje Odongo is a Minister of Internal Affairs and the lady who was beaten was of police. The Minister of defence whose general beat people is seated comfortably.” Joseph Ssewungu MP Kalungu west stated.

While Hon Ssemujju Nganda, MP Kyadondo also the opposition Chief Whip inquired whether Gen Kyaligonza will be subjected to the same treatment.

“Minister should be briefing us whether Kyaligonza is also going to join his colleagues in Makindye.”

Other legislators who joined the condemnation of Kyaligonza’s conduct said that he fell short of discipline and since he’s a member of the UPDF High Command, he should face the court martial.

“He must resign his post as a diplomat, as an Ambassador, otherwise the appointing authority should withdraw him.” Jovan Kamateeka Karamaji Woman MP Mitooma District (NRM) said.

“Gen Matayo Kyaligonza, should resign as the Ambassador. Therefore, I sympathize with wives of Generals these people must be beating up their wives at home. Because according to what we saw that’s the real abuse to the women of this country.”

“Are we in order to discuss Gen Kyaligonza, without discussing Kasirye Gwanga, who has been shooting?” Geoffrey Macho Busia Municipality inquired, but his point of view was trashed by the legislators’ whose main focus was on the disgraced traffic officer, Esther Namaganda, while on duty.”

Kato Lubwama, Member of Parliament Rubaga South said that parliament is wasting time because nothing is going to be done on the General.

“There’s nothing going to happen we are going to talk about it and put it in the dust bin and everything moves on.”

And now, Members of parliament and the general public are waiting the Appointing Authority’s reaction to the resolution arrived at by legislators on Wednesday sitting.