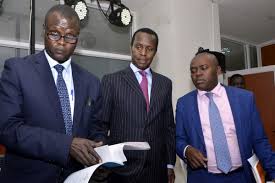 Commission of Land Inquiries yesterday the 27 of February 2019, reopened its probe, with more insights into the controversies surrounding the 640-acre land on Mutungo hill, Wakiso District.

Which they obtained from the late Kabaka of Buganda Sir Edward Mutesa.

Tereza Sserwadda claims she and her late husband William Sserwadda acquired the 80-acre piece of land from Ssekabaka Mutesa in 1954. And fled to exile in Britain in 1966, before handing over the land tittle to them.

She said after her husband’s death, she tried to secure the land tittle from the relevant offices including the Administrator General but in vain.

But later on, she got to know that; a businessman Dr Buule Kasasa, obtained a land tittle on the same land.

“When I returned the next day hoping to get my land tittle from the Administrator General, he came and told me that if you are sure that no one owns a land tittle on the same land, we are going to give you your land tittle, but if there’s another owner we shall not give you a land tittle. But then surprisingly Kasasa had one.”

Sserwadda says she filed a law suit in the high court but went un attended.

The external security organisation’s (ISO) offices are located on this contested land and according to Sserwadda soldiers guarding the ISO’s security Installations, took over her daughters’ incomplete house and restricted her access to the property as well.

“They have guns and have started establishing their houses on our land and even constructed a toilet.”

Government paid over Shs2.4 billion for the land to Dr Kasasa and there’s an outstanding arrear of Shs24 billion at least.

And Sserwadda’s plea to the Commission of Land Inquiry is to helper get the Army off her land.

Last week, on Wednesday 20 of February 2019, Attorney General, Mwesigwa Rukutana, failed to explain how government arrived at Shs24 billion meant to compensate Dr Kasasa over Mutungo land before the Commission. Ending up clashing with the chairperson of the land inquiry Lady Justice Catherine Bamugemereire, who later kicked him out of the meeting.

Relatedly, the Commission of Inquiry faced military harassment when they visited the contested Mutungo hill land from one of the UPDF officers guarding the land who nearly shot at the team.