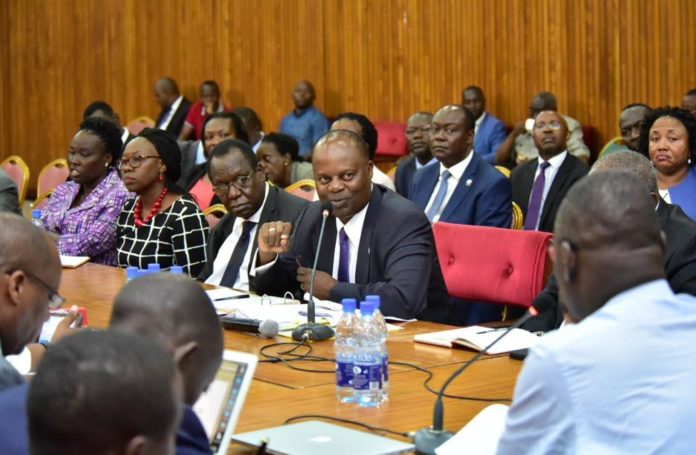 Parliament has today Amended the report of the Bank of Uganda special audit into the closure and sale of seven commercial banks in Uganda that was presented by COSASE.

And before parliament adjourned the debate until Tuesday march 5, 2019 at 2pm, legislators under guidance of the Speaker first considered the terms of reference of COSASE in their recently concluded inquiry into the closure and sale of 7 commercial banks in Uganda by BoU.

“Honourable members I think the naming, I think the Hon chair has explained, that they recently could not name because there were no beliefs to show who actually attended the meeting and the people who attended don’t remember who he sat with.”

“Hon Speaker with your guidance we can accept that other agencies of government which is okay, finds the files of our report as persuasive evidence to start carrying out their investigations in lieu of holding these people culpable for the omissions they did.” Hon Muhamad Nsereko, MP Kampala Central stated.

While Dr Ruhakana Rugunda, the Uganda’s Prime Minister said that: “Giving us three months would be a good time for us to do a thorough job.”

“Government should not compensate bank owners, who have been found to have benefited from fraud in the process of deposing the banks,” leader of opposition Betty Aol Ochan observed.

“We had 53 recommendations, 51 were adopted without any Amendment. We had two Amendments one- was torching the Constitution, within which to come up with an Amendment and failure of which a private member did. Compensation of financial institutions that lost money because of irregularities in the liquidation process has also been accepted except that the house has been guided that it will not apply to any of the shareholders who may have committed fraud. That was the only rider which has been added.”