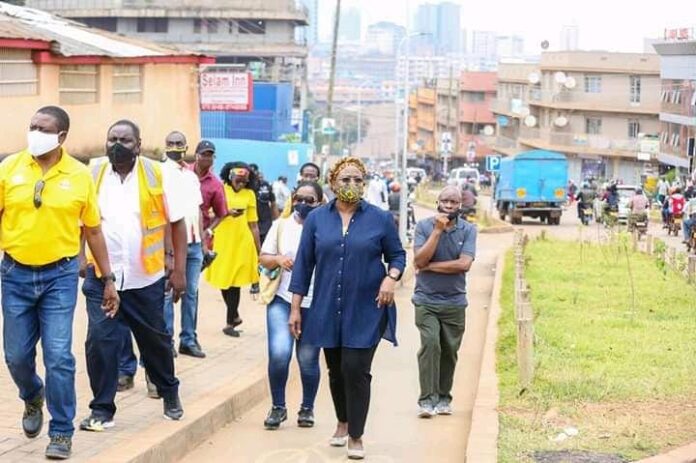 Earlier in May following a lockdown on public transport, KCCA called for the closure of the Old Taxi Park to have it redeveloped.

The ongoing renovations at the Old Taxi Park are set to be finalized in four weeks according to Dorothy Kisaka, the Kampala Capital City Authority (KCCA) executive director.

Dorothy Kisaka made the remarks on Saturday during an on spot tour of KCCA at Work Infrastructure developments in the city to assess the progress of works on the ongoing projects. She said the contractors of the park have informed her that it will be ready in four weeks from now.

“We have been informed by the contractors that the renovation of the old taxi park is to be completed in about four weeks,” she said while touring ongoing projects starting from Namirembe road Non- motorized Transport Route (NMT) through Old and New Taxi parks to Kikuubo, Luwum Street and Centenary Park Lane.

Part of what to expect, the KCCA director said that the developed park will have proper demarcated entry and exit points for both vehicles and pedestrians. The park will also have access control for vehicles to avoid queuing on the surrounding roads and congestion within the park.

‘’There shall also be five designated pedestrian entry points and two walkways at the peripheries of the park.’’ She added citing that there will also be lighting and some waiting sheds where passengers can sit while waiting for taxis.

This comes at a time when the park has been non-operational for nearly five months. The renovation process was set to run for three months however, this has not been possible. The KCCA ED, however, emphasizes that the park is in its final stages of completion soon it will be unveiled.

Earlier in May following a lockdown on public transport, KCCA called for the closure of the Old Taxi Park to have it redeveloped.

According to the by then-interim Executive Director of KCCA, Andrew Kitaka, they chose to embark on the park works during the nationwide lockdown to avoid facing difficulties in having to relocate taxis in case public transport was still operational.

“Government has commenced the rehabilitation of the park and this is expected to take three months. We chose this time during lockdown to start, working day and night because it wouldn’t be easy relocating taxis in case public transport was still operational,” Kitaka explained in May relating the situation to the one that saw the development of the new taxi park.

“The public should bear with us during this short-lived inconvenience. We have done this before during the rehabilitation of the new taxi park in 2012.”

Part of the work to be done on the park, Kitaka said then that they will include excavation and disposal of the existing material, and installation of underground drainage line, rockfill as well as the construction of new foundation layers for the carpet which will be fully marked to indicate areas of parking taxis and pedestrian movement.