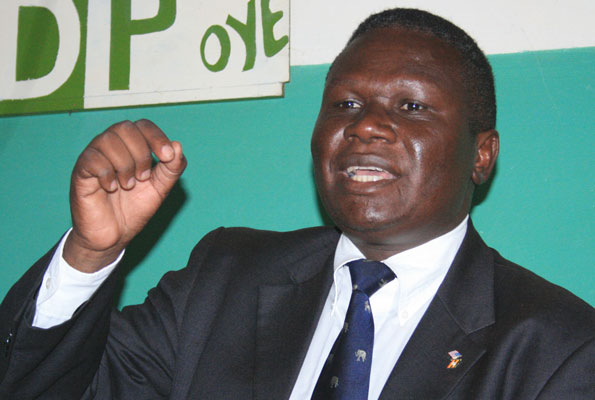 Democratic Party members appointed into Dr Kiiza Besigye’s People Government in trouble as their Party leader Norbert Mao draws a line for them to leave the party or decline the appointment.

Mao the DP’s president general questioned the logic behind Besigye’s appointments that fetched some of his members into his newly formed cabinet named ‘People’s Government Assembly’ without his permission or consultation.

In a media briefing held every Tuesday at their party offices in Kampala, Mao said People’s Parliament is intended to distract other opposition parties as portrayed in their appointments which fetched some of their members without their knowledge.

In addition, Mao urged them to decide whether to be DP members or cross to FDC because he is fed up of members who cause distraction on their way to the presidential seat.

“We don’t want water melons in DP, those who are only green outside, but inside there are many colours. There’s no room for water melons in the Democratic party. But it’s not for me as Norbert Mao to decide that, belonging to a party is a choice. You are either in or out, if you want to get out the door is open, if you want to come in the door is open. But don’t stand in the door. Their people in DP who are standing on the door, you are either in or out. So, I think we have to make a decision and we push them out, because when you are at the door it means you are not sure whether you want to come in. so we say first get out and decide.”

“The concern we have as DP, is that some of our members, are now part of that People’s Executive Committee, but there’s no way you can be fully immersed as part of the leadership of another political party, and at the same time you belong to the Democratic party,” Mao added.

Now, according to Mao, National Council is going to hold a special sitting to decide on the matter.

“This one has not been discussed anywhere, but there will be a motion at the National Committee to deal with that and we have a solution. Our DP constitution can take care of that.”

Soon after the appointments, Betty Nambooze, the Mukono Municipality MP, stated that before Dr Besigye disclosed his cabinet he made consultation in different opposition parties, which contradicts Mao’s statement.

Relatedly, Mao expressed his discontentment with the Jinja area police stating that they have spoiled their arrangements and confiscated two pick-up trucks that were transporting public address systems.

“We have everything were supposed to do and the police head quarter allowed us to proceed but the area police want to stop us.”

Adding that this will not stop them from holding their reunion because they followed police stated guidelines.