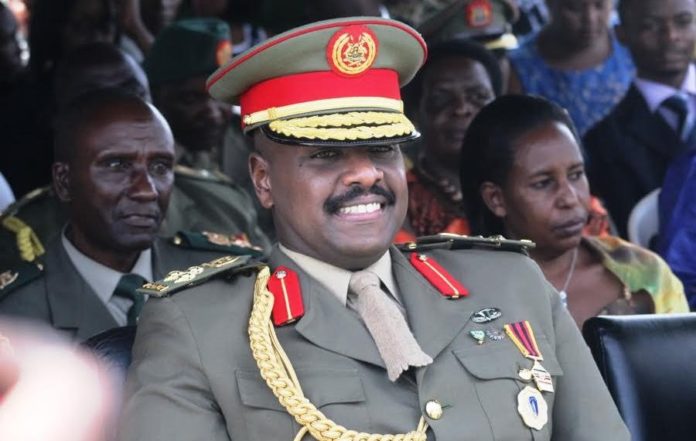 Uganda People’s Defence Force (UPDF) have today decorated 66 Army Generals including the first son Muhoozi Kainerugaba. The decoration ceremony was held in Mbuya, at the Ministry of defence’s Headquarters.

The Military ribbons were laid down out on white tables, while the Army brass band sounded military songs from the 1980s NRA’s song book. And at 10am, Gen Ivan Koreta led the team to start off their day.

The ceremony was officiated by Ministers including Bright Rwabirama, Elly Tumwine, Katumba Wamala and JJ Odongo.

These Army officials were joined by their partners in this decoration ceremony. General Ivan Koreta was the first to be decorated and later, first son Muhoozi Kainerugaba also stepped up to take his new Lt Gen rank.

Soon after getting his green and gold stars’ ribbon, Muhoozi expressed his gratitude towards his achievement and said UPDF at this time has a bright future. As he addressed the press.

“The future of UPDF is very bright. It’s a disciplined force and increasingly professionalised and it has greater personnel’s.”

While Ivan Koreta, in his statement argued officers to focus on service and care of the service men under them in their new promotions.

“I know people are looking at you, and the soldiers look up to you, but also the people that you have been associating with, are actually proud of what you have achieved. So, this is added responsibility and like they say you need to be conscious.”

Jorum Mugume, the 37th recruit of the NRM forces was also decorated with a four-star general and Don Nabasa, the commander of special forces as well.

While Sabiiti Muzeyi, who despite being a club of officers in the SFC, was decorated a Major General rank.

Felix Kulaigye, the former Army spokesperson was decorated a Bregadier General. And the ceremony was attended by three former Chiefs of Defence Forces.