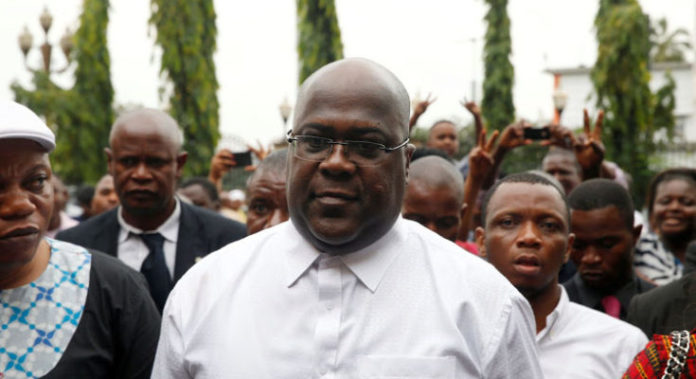 The question on when the inauguration ceremony for Tshisekedi as the next president would happen has ended as DRC is now set to officiate the ceremony on Thursday, according to reliable sources in Kinshasa.

On Wednesday aides to Tshisekedi and outgoing president Joseph Kabila said that the inauguration ceremony will take place at the palace of the Nation, the seat of the presidency, starting midday.

In 1960 Democratic Republic of Congo acquired Independence from Belgium and since then Congo has lived in political unrest as regards to power transfers. And now after the Thursday function of raising a new leader, it will mark the first peaceful transition of power in DRC’s history.

Joseph Kabila aged 47, has ruled DRC for 18yrs after he succeeded his father Laurent-Desire who was assassinated in 2001. And now on Thursday, he will be handing over power to his successor from opposition Felix Tshisekedi after he was forcefully removed from office.

Tshisekedi was announced winner of the thrice-delayed election with 38.5% of the vote, while Martin Fayulu from the opposition came out with 34.8%.

Fayulu claims he obtained 61% of the total vote against Tshisekedi also from opposition and Emmanuel Ramazani Shadari who was Kabila’s appointed contestant from the ruling party both of them coming out with 18 percent.

He lost the Constitutional Court challenge to Tshisekedi, and foreign support for his position was declined, mainly to avoid the bloody clashes that pronounced DRC’s history.

Tshisekedi succeeded the late Etienne Tshisekedi, his father who died in February 2017, at 84 years of age.

One of his congress was held on December 30 in line with presidential and provincial polls.

Joint Front for Congo (FCC) which support Kabila, controls 337 seats in the 500-member assembly against 102 for Fayulu’s coalition, Lamuka and 46 for the Heading for Change (Cach) coalition seconding Tshisekedi according to a provincial UN tally.

The DRC presidential inauguration was originally scheduled for Tuesday, but later on suspended to Thursday in favour of international guests.