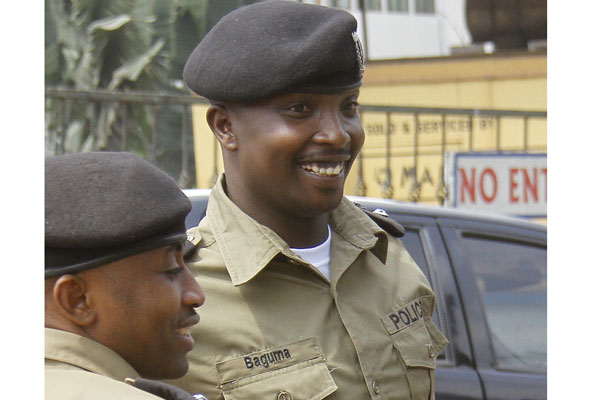 In October, 2015, Afande Baguma and eight others including the Lumumba Avenue based Pine car bond businessman, Muhammed Ssebuwufu was arrested in connection to the murder of the late Betty Donnah Katusabe.

It was alleged that the accused descended on the late Katusabe and tortured her to death when she failed to remit a balance of sh9m to Ssebuwufu who sold to her a car on credit.
On August 30, 2016, Baguma was taken to Kigo Prison where he spent two weeks before he was released on bail. This sparked a serious debate with many questioning the criteria that was followed to set him free yet his co-accused who were in Luzira were still incarcerated.

After a long court battle, the Director of Public Prosecution (DPP) turned Baguma into a state witness in the case, and dropped all the charges that had earlier been preferred against him.

After being accused and  acquitted of murder and kidnap charges, the inspector General of Police, Martin Okoth Ochola has re-deployed the former Kampala Central Police Chief Aaron Baguma.
According to a Police message dated January 17, 2019, addressed to all unit commanders, directors and heads of departments, Baguma has been deployed in the Private Security and Fire Arms department, under the Directorate of Operations.

The initial message, he had been deployed as an attaché at the National Medical Stores (NMS) but it was cancelled.