The fourth edition of Evoke Night in Kampala launched promising revellers with a futuristic experience.

Yesterday evening, Thursday, February 27, 2020, Evoke Night season 4 was launched at the Evoke premises in Bukoto, a Kampala suburb. This year’s edition begins with the title “Evoke 2030, the future is here.“

As the fourth edition, it is expected to be the most lively season, with lots of entertainment and production going from the present decade to the next.

As an event that exists up to its unorthodox youth representation, it’s said that Evoke is audacious in setting an example in the space of events by creating its predominant art elements with a bird’s eye view of the far future and thus this season will have four Kampala events and two upcountry events in Jinja and Nkozi.

“Our new season will exactly be represented with Evoke’s freshness and outstanding production, classic experiential set-ups and unbelievable talent on the stage. Revellers should wait to be blown away, “relayed Emmanuel Sebijjo, Evoke Producer.

The event served as an award-giving ceremony for all previous season winners at the launch.

“Since our first season in 2107, the growth has been through leaps and bounds. That is why we have maintained aiming at excellence but never swaying away from our core values and very passionate about empowering youth despite being a pivotal platform for untapped musical talent

As Evoke Uganda has reported, Timothy has worked hard to empower the youth so their outstanding services allowed them to live and manoeuvre in the face of all challenges.

“Maintaining our values, it’s the only reason and the magic behind our longevity and unwavering loyalty of our fans. I believe it can particularly go upward from here, “added Timothy Bukenya.

Timothy Bukenya argued that there has been a great deal of change in every edition that has been staged by Evoke and statistically recorded by larger crowds of young people who come up with tremendous ideas.

“For every edition, Evoke Night grows to reach a bigger youthful crowd and coming up with better ideas to keep this crowd entertained and informed. The film industry has immensely impacted the livelihoods of the youth worldwide because it’s undoubtedly one of and perhaps the bigg

What is the Evoke Night season 4?

Evoke Night is slightly different in the formation of the theme.

Being a monthly show with a series of night entertainment that fuses Acapella, Rap, Spoken Word, Live Band, Dance, and Style, it aims to encourage the urban and semi-urban youth of Uganda to be active toward the cultural, social, and political aspects of the country through its insightful activities and engagement. 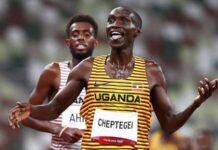 Cheptegei Nominated for the 2021 World Athlete of the Year Award