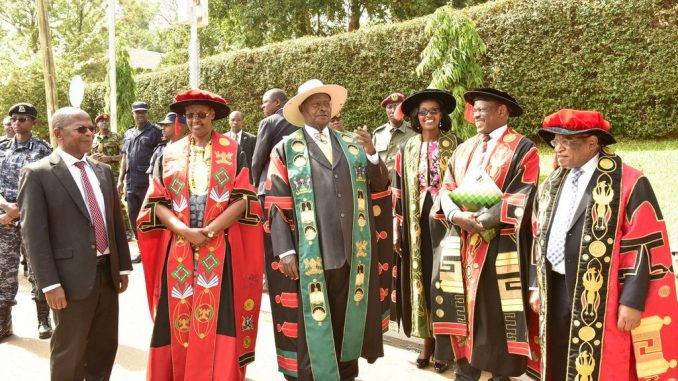 Forum for Democratic Change (FDC) has placed all the blame on president Yoweri Kaguta Museveni and the first lady also the Minister for Education, Janet Kataha Museveni for the existing Makerere University mess.

MUASA & MASA claim that their suspension was illegal with unclear statements.

Ssemujju Ibrahim Nganda, FDC spokesperson stated that all the difficulties surrounding MUK is because of Museveni who he claims desires to micro manage the institution.

“The problem is Museveni wanting to Micro-manage Makerere University through his wife, through Tanga Odoi and Kiwanuka Kiryowa and others. So it will take someone of extra courage to resist them. You have seen each day there is a problem at Makerere, the first person to speak is Tanga Odoi. By the way Tanga Odoi speaks allegedly on behalf of the alumni-those who went to Makerere. I even don’t know how he was elected because they made those elections sacred, they are the only ones who know when those elections are there. The problem of Makerere now is not Nawangwe but Museveni wanting to micro manage Makerere.”

In addition, he said that Nawangwe should not be blamed because he is working under government instructions.

“You saw Museveni praising Prof Nawangwe the Vice Chancellor for expelling people who have no discipline including lecturers. Museveni’s aides many of them have ended up in Makerere. Council yesterday announced that they need Tayebwa and Bruce Balaba not to be part of the council. But you already have Kiryowa Kiwanuka, one of Museveni’s aides. You have Janet Kataha, you have Tanga Odoi they are running Makerere as if it is a department in State House,” Ssemujju asserted.

According to Ssemujju, Janet Museveni is not qualified neither does she owns the required experience to manage the education section in the country.

Adding that her appearance together with President Museveni at the 69th graduation ceremony last week on Tuesday was like a family celebration of their years in marriage.

Relatedly, Ssemujju observed that Uganda’s development will still be stagnant if the country does not lay down firm institutions that focus on research and innovations.

Tanga Odoi, former MUASA chair is currently the NRM chairperson electoral commission also the existing chairperson of the Makerere University Convocation. A body uniting both Alumni and MAK staffs but he has been single sided seconding lectures.

On December 23, 2018 Makerere University expelled 32 staff and suspended 13 others over indiscipline cases that includes absconding from duty, awarding marks to student’s in exchange for sex, insubordination, assaults, financial fraud, negligence from duty and failure to hand in student’s marks in time among others.

And since then, these MAK staffs petitioned speaker of Parliament Rebecca Kadaga to intervene in the matter claiming that they were illegally expelled and suspended from the institution.