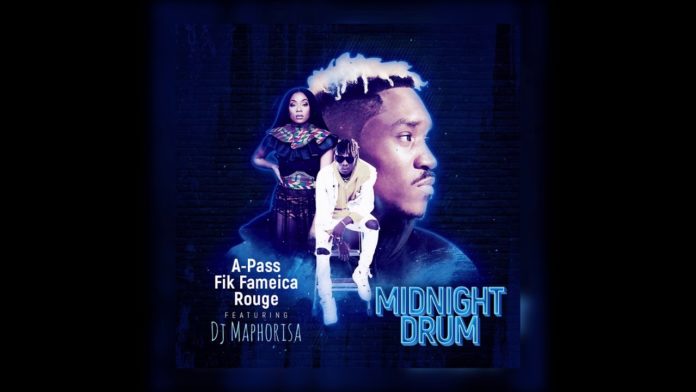 In just a week of its release, midnight drum is already a smash hit and it has everything to do with the king of Gqom, Dj Maphorisa meeting three other immensely talented folks, from two different countries whose greatest thirst is one for greatness that is Fik Fameica, A Pass and Rouge.

Maphorisa, one of the most influential and revered producers on the continent, exports his Gqom influences to this song and goes all in while at it. The song totally has a South Africa sound to it.

She brings a dance vibe to her verse with her catchy rhyme and prose. One cannot help but fall in love with A-pass’ spontaneity and charm on this track for he totally changes the pace of the song.

Fik literally rips the beat apart as if he owns it. In his latest collaborations, Fik Fameica is making a statement that he is not afraid of jumping on any track and making his mark.

He does not let his guard down on the fast-paced Gqom sound, he comes through with his heavy hitting lyrics, very swift and remarkable rhyme and poetry and certainly does not leave his spontaneous side behind.

In split seconds Fik closes one of what I predict to be 2018’s hottest collaborative efforts. With new generation ninjas like Fik Fameica and A Pass bringing this much heat to the game, the old game players ought to review their craft before it is too late.

An overwhelming effort I must mention.