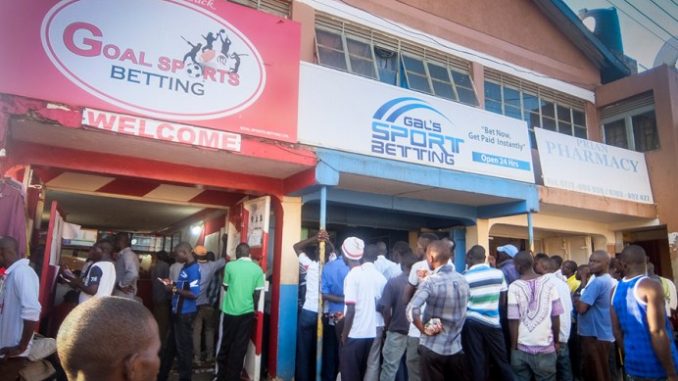 Minister of Finance and planning Matia Kasaija has clarified on the controversial move to ban sports betting in the country. He says Government will only authorize local betting companies to operate and no foreign based company will be allowed to transact betting business in Uganda as way of regulating betting companies in Uganda.

While addressing journalists at Imperial Royale Hotel in Kampala, Kasaija stated that the country does not benefit from these foreigners because they export the profit earned back to their home countries which Uganda will not accept.

Kasaija further noted that; the revenue government generates from betting companies cannot be under estimated and as a result they have decided to license only local companies.

“We are not banning gaming. We are saying this activity should be limited to only Ugandans. We have said that licenses that are running will not be renewed and new ones will not be issued to foreigners because we’ve discovered so much of our money is being exported through that gaming thing which as far as I am concerned has little value to the economy. It ends up by taking our very scarce foreign exchange which we earn through very difficult circumstances like growing coffee and other crops.”

Meanwhile, state Minister for Finance and Planning David Bahati while at the floor of parliament Tuesday afternoon emphasised his statement made earlier which was a presidential directive to ban betting companies in Uganda because they have diverted youth attention from working hard.

He said that government will no more issue out licenses to new betting companies and no more renewing of expired licenses.

“We should not license new betting and gambling companies. Two, those which are expiring should not be renewed. Three, we look at the mechanism on how we can strengthen and better regulate the sector with a view of looking at different options that include limited number of them, locations where they operate from because as I speak Madam Speaker these machines are everywhere in the country.”

Bahati highlighted that government was serious on this resolution following public outcry on the negative impact of various betting companies in the country.

“His excellency the president will be giving more details in the few days to come and so let’s wait for his communication before we open up this debate but the issue is better regulation for this sector to protect our young people at the same time balance other factors.”

However, gambling businessmen earlier on reacted negatively to the ban saying that it’s impossible to block betting activities in Uganda because betting can easily be accessed on the internet.

“Gambling is available even in developed countries, it’s available on the net we can’t actually stop it. If we are phased out which I hope won’t happen we will not be in position to control the youth, they will resort to illegal activities.”

Another betting official at Galz located down town Kampala Patrick Lubaale, said the business is sustaining a number of people and banning will affect many.

“If the president is complaining about the negative effects on young people, we have already been sensitizing them and the public about the irresponsible betting and people are aware about this, but this should not be the reason to ban the trade.”

While Samuel Mutekanga an operator at Betway was shocked by the decision.

“The directive is not only a surprise but shocking. It is a danger to our investment. Were we consulted? No.  how can such a ban come in a pedestrian way? Where does it leave the money we have invested?”

Gambling is a lawful activity in Uganda regulated by the gaming, gambling and pool betting act. 2000 active gaming and betting activities are believed to exist in Uganda and it’s expected to increase by 2020.

Government looks to regulate, take charge of running sports gambling business in the country that is practiced by most youth in the country.

And just few years down the road betting companies have dominated Uganda’s cities, villages and towns even across East Africa steered by the universality of satellite, digital television and smart phones that allows online betting.