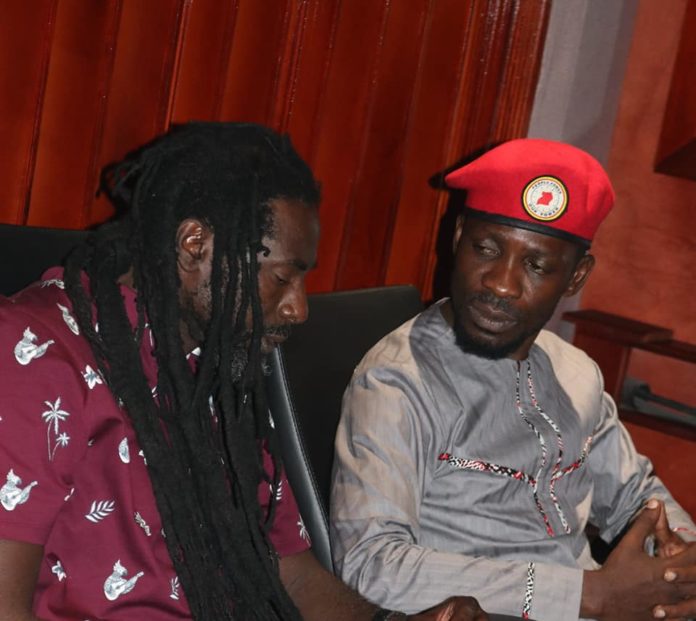 Singer turned politician Robert Kyagulanyi Ssentamu aka Bobi wine and wife Barbie Itungo who are currently in Jamaica for a music tour are probably the first Ugandans to meet legendary reggae artist Buju Banton ever since he left prison where he had spent 7 years. The Kyarenga hitmaker couldn’t hide his excitement after meeting his childhood idol and mentor Buju Banton.

Bobi Wine was this week in Kingston, Jamaica where he performed at the biggest Reggae Festival – the Rebel Salute – the first person from East Africa to achieve those feet.


The singer took to his official media platforms praising the singer and he said it is a dream come true. According to a close source to the Bobi Wine family, the Grammy award-winning reggae star assured Bobi Wine not to be afraid to go to jail for what he believes in.

Having spent seven years in jail for a crime he says he never committed, Buju Banton was certainly the best man to keep the Kyadondo East MP on track.

“It was so captivating. It was very spiritual. It felt like I was seated under an oracle of wisdom. Wisdom flowing without end. Buju Banton the great! It was very pleasant to see that the seven years he spent in jail did not break him. As a matter of fact he is even stronger! He reminded me that jail is part of the price those who fight for freedom must pay before things get better. Meeting my childhood idol, a man who inspired me so much as I grew up was one of the best experiences I could ask for. I saw him. I touched his skin. We had a conversation. I can confirm that Buju Banton is free, alive and well,”” Bobi Wine wrote.

The latest news reaching our desk indicates that the Bikwase Kyagulanyi singer will then head to Washington DC in the United States to entertain his supporters and also to listen to different stories from different Ugandans in the states.