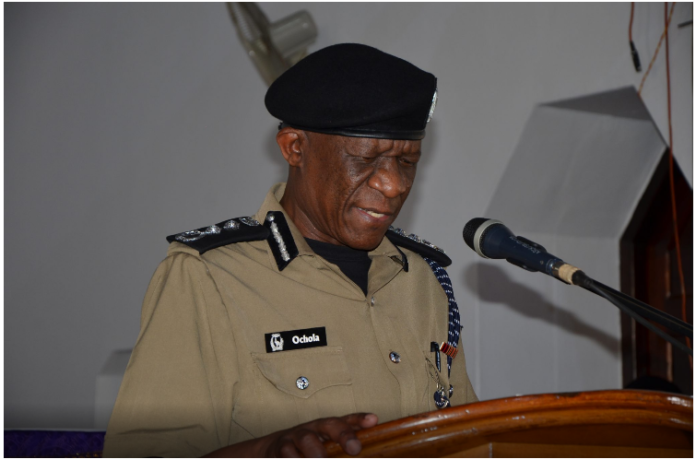 Uganda police through the Inspector General of Police Martin Okoth Ochola has issued directions and rules to be followed by artistes and concert organisers during this festive season.

Ochola say it’s a crime for any promoter or events manager to organise and advertise concerts country wide without prior notice of the police. He adds they are required to obtain permission from the IGP before any activity is carried out.

He notes that the significance of this is to maximise security and comfort of revellers.

“Event’s organisers and managers have equally been guided on dos and don’ts to ensure anyone’s security and safety especially revellers. Parents are urged to talk to their children’s and guide them to take care and responsibility of what happens around them,” IGP Ochola stating.

The setting up of these guidelines followed allegations filed against the police by Kyandondo East MP Robert Kyagulanyi Ssentamu accusing them for blocking all his concerts organised.

Bobi Wine was obstructed by police from performing in Jinja show over the weekend who later petitioned parliament over continued stoppages of his concerts by police yesterday afternoon.

“Hon. Colleagues since last year in Oct. the Uganda police made it a habit to sabotage my music concerts,” Hon. Kyagulanyi observing.

However, music promoters, events and concert organisers yesterday afternoon vowed to contest against the police ruling.

While addressing journalists they promised to trail police to courts of law over the lined rules before them and for stopping Bobi Wine’s concerts previously.

They further stated that; they are going to drag police to courts of law, for them to come in person and provide an explanation to them over the matter.

And they also said what police is doing is totally out of law and the need to place fire brigade and police dogs before the concert is totally wrong.

But police insisted that promoters and events managers have to observe security of persons and their properties especially during this festive season.

“No one will conduct a show without fulfilling the required guidelines. Do your check and portrait, what we know is that the guidelines that were given the intention is to protect everyone including the many revellers that come for this entertainment. The promoters, the managers sometimes look at the economic angle and forget the security component,” IGP Ochola observed.

He also said as police they don’t have any problem with anyone as long as they fulfil the stated guidelines.