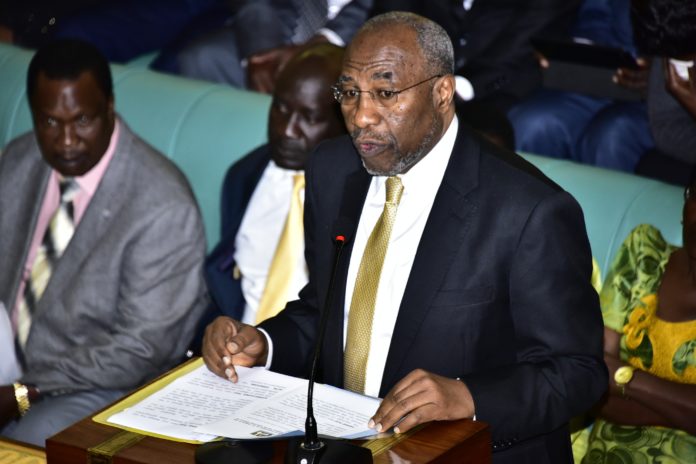 Parliament yesterday tasked government to explain why Hon. Robert Kyagulanyi Ssentamu has been banned from performing at his musical events and organising his own music concerts since his rise to parliament.

This came in after Hon. Kyagulanyi popularly known as Bobi Wine petitioned parliament yesterday over police’s continued obstruction of his music concerts.

“Madam Speaker, Hon. Colleagues since last year the police force has made it a habit to sabotage my music concerts. In October last year five of my concerts were stopped. Now this year in October, I organised a concert in Namboole stadium but it was stopped by the police for the reason that has not been given yet,” Kyagulanyi stated.

Bobi wine also informed parliament that ever since the police begun blocking him from performing and organising concerts his finances have been greatly affected.

“Music is my ‘bread and butter’ that my family survives on not only my family but my fellow artistes. All the people I work with in the crew, there are more than 200 people that get employment every time I stage shows, they have been rendered unemployed. So, I have been very affected financially and psychologically,” Kyagulanyi said.

In his plea to parliament Bobi Wine also observed that security agencies have overstepped his rights to worship and there after asked parliament to intervene in the matter.

“Madam Speaker I am not allowed to even attend church. On the 9th of this month I was supposed to attend mass in Kangulumira but Madam Speaker the congregation was tear gassed for reason being I was in the mass. This Sunday on the 15 of December, I was supposed to attend mass in Lugazi but the church was surrounded by police, people were beaten up I did not attend that mass,” said Bobi wine.

However, the speaker of parliament Rt. Hon. Rebecca Alitwala Kadaga on Tuesday summoned the Prime Minister Hon. Ruhakana Rugunda to come and explain why the state has contravened Hon. Kyagulanyi from conducting his businesses.

The directive came in after Gen. Elly Tumwine the minister of security’s failure to provide an explanation over the matter.

Tumwine was asked; “Are you aware about the inability of Hon. Sentamu to attend church and to organise music concerts?” Hon. Rebecca Kadaga.

“Hon. Kyagulanyi will be my witness. When he came to parliament as musician I had a discussion with him, and I asked him a question, how will you balance your music from politics?” Tumwine stated but later he was distracted by legislators in the middle of his speech.

Hon. Rebecca Kadaga there after cut the ministers statement short by saying that;

“I think the minister takes this as a joke. I want to ask the Prime Minister Dr. Ruhakana Rugunda to come and explain whether the state does not allow Hon. Kyaguanyi to conduct businesses,” she said.

Where legislators said that there’s no prohibition whatsoever for a member of parliament to continue with his profession.

And Kadaga faulted government over the matter.

“The form we signed when we were elected does not say if you are a dancer, stop dancing; if you are a teacher stop teaching no,” she noted.

Finally, Gen. Tumwine concluded his statement by saying that; “If you allow me to continue I will say these are occupational hazards,” Tumwine observed.

We shall keep you posted here t Flash Uganda media