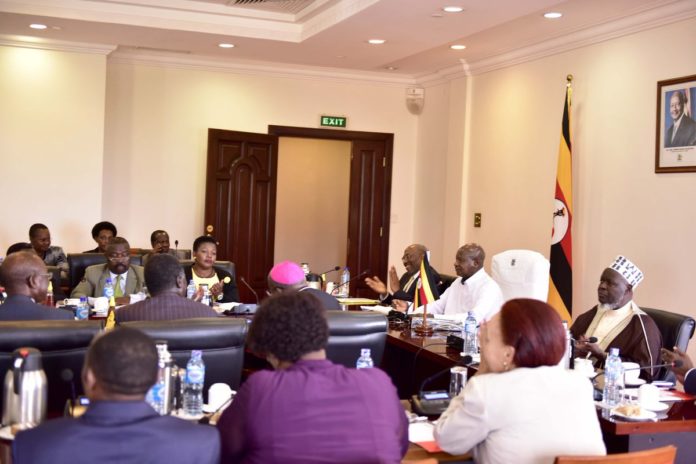 A committee of 22 people has been instituted to steer up the national dialogue council after President Yoweri Kaguta Museveni approved this dialogue yesterday at Entebbe state house.

President Museveni however, cautioned organisers on the form of dialogue and the words to be used during the dialogue in order not to violate the constitution.

This delegation constituting the organisers of national dialogue held talks with president Yoweri Kaguta Museveni and later came up with joint message that will aid the dialogue grow.

Justice James Ogoola stated that the dialogue process will be launched in March and the dialogue to be held in Oct. 2019.

“We are estimating that this will come at around March next year. It will also have the mandate to hold the dialogue conference within 6 month of the launch which will take us at around Sept. to Oct. 2019 of next year. The conferees (people at the conference) will mutually agree who to take chair or facilitate the conference proceedings,” Justice James Ogoola one of the conveners of the dialogue.

After the revelation president Museveni was over joyed and said that;

“So I am very happy to take part in this dialogue you will hear our views,” president Museveni noted.

However, he also warned them against unnecessary fights.

“Really some of the things you said are contestable but one thing which is not contestable is talking at one another, shouting at one another rather than dialogue. So, with that I am very happy to hear and I am looking forward to really see this dialogue, so that we see how it will add value to whatever we are doing. I thank you,” President Yoweri Kaguta Museveni observed.

Meanwhile, Sheikh Ramadhan Mubajje the co- chair of the convening organisation asserted that the dialogue is housed on eight key points including national diversity, constitutionalism, minimum standards of national delivery, historical questions as well as consensus on delivery and national resources.

“We have discussed almost everything on how it will move and we want to set aside egos for the good of the country,” Mubajje asserted.