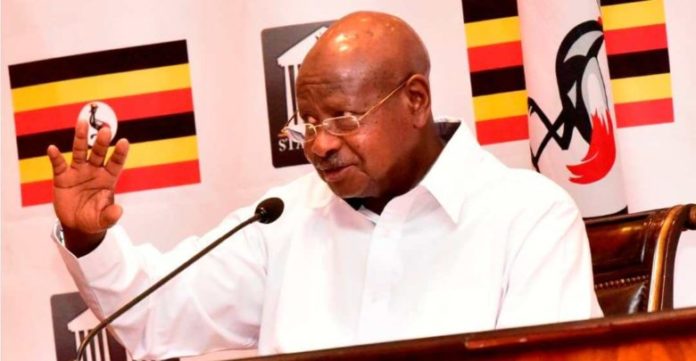 President Museveni replies Hon. Kyagulanyi aka Bobi Wine on his accusations made on his facebook page on 10th December 2018 saying that NRM and President Museveni are part of the biggest problem of corruption which is eating up Uganda these days.

Read the message from the NRM national chairman website (http://www.nrmnationalchairman.com) below

NRM National Chairman, President Yoweri Museveni, has launched a new anti-corruption chapter by instituting a new impenetrable system of reporting the corrupt headed by Lt. Col. Edith Nakalema. The number to use is 0800 202 500, 0778 202 500

With optimism and commitment, change will be realized in defeating the few corrupt bugs in the system.

Now that the National Chairman has pushed the button, other leaders and the general public should do their part; reporting cases and taking action.

All leaders must comply with the Leadership Code (Amendment) Act, 2017 and members of the public should desist from corrupting Government workers on duty.

For Kyaddondo East MP, Robert Kyagulanyi aka Bobi Wine, he needs to know that time for talk is over. If he wants to test the veracity of this declaration, let him go ahead and engage in corrupt acts; he will see what will happen. The habit of looking at every issue as an opportunity for political posturing and lyricism will leave many like Kyagulanyi scathed.

How many cases has this loudmouthed MP reported? How many motions has he tabled since becoming a legislator aimed at strengthening anti-corruption measures? Nothing he says is of substance or realistically admissible to the cause. It takes sobriety to understand the intricacies of this fight. Kyagulanyi should resign from Government if he has not understood the role he has to play as a leader. Kyarenga indeed!