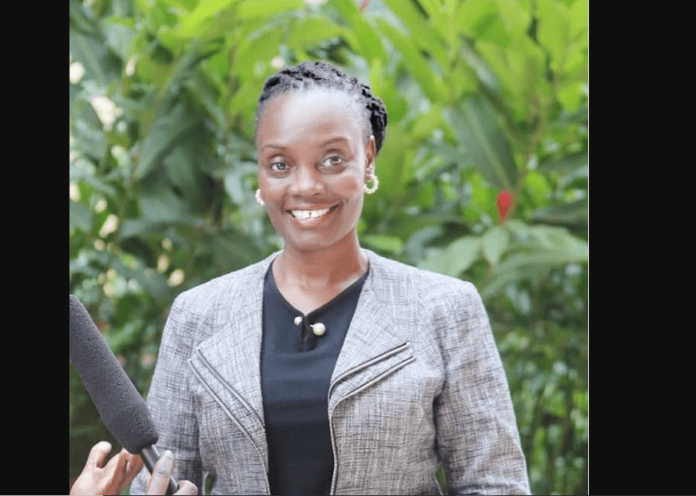 Jenifer Bamuturaki is a businesswoman and Corporate Executive. She is the current CEO of Uganda Airlines, the flag carrier of the Republic of Uganda, a position she has held since July 2022.

Before Bamuturaki was appointed full CEO, she had held the position at the same airline in an acting capacity.

Place of birth and Family

Jenifer Bamuturaki hails from the Tooro Kingdom which is located in the Western region of Uganda. Not much else is known to the public concerning her roots and family background.

She is estimated to be in her mid to late forties and is married with children. However, owing to the high level of privacy she observes concerning her personal and family life, this publication is unable to report anything beyond what is stated in this article.

Jenifer Bamuturaki attended Kyebambe Girls School from 1984 to 1988, and Nabisunsa Girls School between 1989 and 1990 for her secondary school education.

Upon completion of her secondary education, she was admitted to Makerere University, Uganda’s largest public university in 1990, from where she graduated with a Bachelor of Arts degree with honours in Social Work and Social Administration in 1993.

During her time at Makerere, she was an avid basketball player and also served as Communications Minister in the students’ guild.

She also holds certifications from the International Air Transport Association (IATA) in airline sales, as well as revenue management and hotel sales certifications. She was enrolled in Makerere University as of August 2022 pursuing a Master of Public Administration degree.

Jenifer Bamuturaki’s career spans nearly 30 years. She began her professional career as a country manager at Imperial Botanical Hotel in July 1995 and then moved to Sheraton Hotel between 1996 and 2000.

At the Kampala Sheraton Hotel in 1998, she worked as Assistant Manager in charge of the Front office, before rising to the position of Group and Banquet Coordinator in 1999, and later Sales manager that same year until the year 2000.

Her first feel in the airline industry was at East African Airlines where she held the position of Country Manager – Uganda from September 2000 to September 2003. Between 2006 and 2007, she served as Sales Manager of iTravel Agency in Kampala.

Bamuturaki began working for the now-defunct Air Uganda in the sales and later marketing departments in 2007. By the time she left the company in 2014, she was the Head of Sales and Marketing.

She returned to the Sheraton Kampala Hotel in September 2014 and served as Director of Sales and Marketing until September 2016 when she left the hotel for the second time.

Between June 2017 and April 2019, she worked at Golden Tulip Canaan Hotel in Kampala serving as Sales Director.

When the Ugandan government reestablished Uganda Airlines in 2019, Bamuturaki was hired as the new airline’s commercial manager. However, she was not awarded a long-term contract after the probationary time was through. In March 2020, she departed from the airline to focus on other business ventures.

The shareholders called back Bamuturaki and appointed her the acting CEO after the airline’s entire board of directors, along with several senior management officials, were suspended and barred from acting in April 2021.

She was appointed substantive CEO of the national carrier in May 2022.

She is the first woman to serve as the airline’s substantive CEO thanks to her selection for the job. Before Bamuturaki was appointed to lead the nation’s national airline, Ephraim Bagenda and Cornwell Muleya served as interim CEOs.

Soon after being named the airline’s substantive CEO, she spoke with the New Vision newspaper about three areas on which the company will concentrate in the short and medium term.

At Entebbe International Airport, independent ground handling must be established no later than August 2022.

The second aim is to expand the airline’s A330-800 fleet’s destinations. The following places are being considered: Kinshasa, Lagos, Accra, Mumbai, and Khartoum. The third task is to make an effort to cut operating expenses.

Bamuturaki holds a Women in Leadership Certificate from UKQAS (UK Qualifications, Assessments and Skills), the UK-based Awarding Organisation that has several international centres and members around the globe delivering a range of qualifications and programmes in various industries and sectors.

The Chief Executive Officer of Uganda Airlines, Jenifer Bamuturaki, was instructed by the Committee on Commissions, Statutory Authorities, and State Enterprises (COSASE) to resolve the confusion around her name.

The committee’s chair, Hon. Joel Ssenyonyi, gave Bamuturaki two weeks to make sure that the ambiguities surrounding her name are resolved.

The instruction was given during a meeting with the airline management on Tuesday, September 13, 2022, chaired by Bamuturaki, regarding the red flags identified in the Auditor General’s Report for the Financial Year 2020–2021.

It is reported by sources in COSASE that by executing a deed poll, Bamuturaki changed her name to Jenifer Arnold Lenkai in 2019. The committee does observe that, although she signed her employment contract with the government under the name “Lenkai,” she has persisted to use her prior name, Jenifer Bamuturaki.

“I’m in a pickle; I wonder who I’m dealing with in this situation. The Hon. Ssenyonyi was quoted as saying, “I am advising her to put her name issues right because of this.”

Jenifer Bamuturaki changed her name to Jenifer Arnold Lenkai but then she continued to use her previous name after making the change and yet she did not file a new deed poll to formalize the change.

Committee chair Ssenyonyi asked for these discrepancies to be sorted out expeditiously. “Whatever you want to name yourself, just make sure it’s legal.”

The Hon. Ssenyonyi stated, “We might compile our report as a committee and it has Bamuturaki and she goes to court claiming she is Jenifer Arnold Lenkai.”