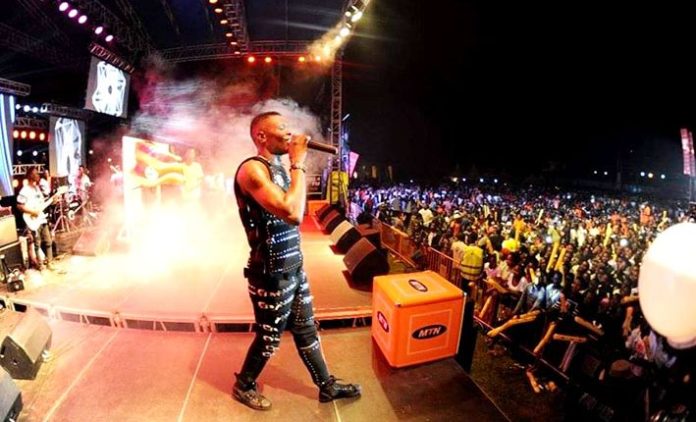 Music beast and East Africa’s legendary musician Joseph Mayanja aka Jose Chameleon this week proved his net worth and power in the Ugandan music industry when he staged a huge successful Legend Saba Saba concert at Lugo cricket oval on Friday 7thDecember 2018.

Thewale walehit maker pulled thousands of music lovers to one place and performed hundreds of the many hit songs he has released since mid 1990s. Chameleon performed songs like Wale Wale, Valu Valu, Kipepepeo, Tatizo, Champion and several other songs which left Ugandans crying for more by the time the show ended.

Chameleon’s fans started entering as early as 4.00 pm well geared up for the show which attracted big sponsors like MTN Uganda, NBS TV, Cocacola and organized by one of Uganda’s most respected event organizer and promoter Balaam Baruhagare

The show even got interesting when Kyadondo East Member of Parliament Kyagulanyi Ssentamu alias Bobi wine joined Chameleon on stage to perform his Kyarenga hit song. Bobi wine expressed his love for Chameleon’s music and promised to work with him for a better music industry and Uganda at large.

At Lugogo, Chameleon strengthened his position as the biggest Ugandan artiste to ever live when he filled up the huge Lugogo grounds.