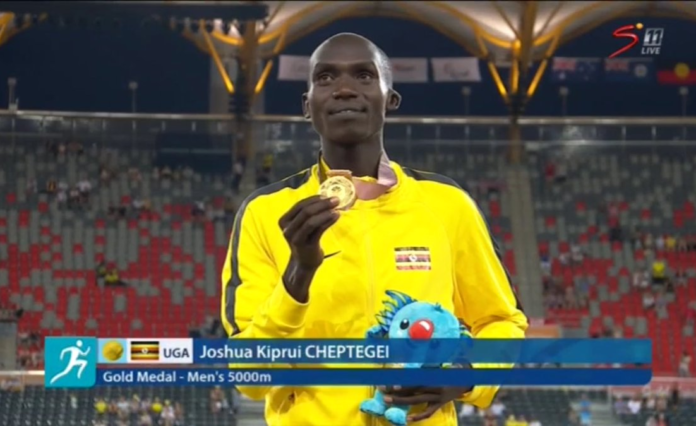 The conclusions made that Ugandans always praise those ones who have succeeded and brought prizes seemed to actually be true when top athlete Joshua Cheptegei won two golden medals in The Common wealth games held in Australia where all countries which were colonized by United Kingdom gather and fight for the available medals. Several countries have participated and scooped medals, among these include Uganda, Kenya, South Africa, Wales among several other countries.

It should remembered that last year in 2017, Cheptegei lost the gold medal to a one a Kenyan athlete just a few metres to the finishing line and this caused stampede and social media and Cheptegei became the laughing matter in town. And this year, Cheptegei made his country proud when he defeated all other athletes from other countries.

Cheptegei first won a gold medal on the morning of 8th April 2018 after beating his contenders in the men’s 5000 metres race competitions in a time of 13 minutes 50 seconds and 83 micro seconds. After 5 days the same Joshua Cheptegei was on top of all Uganda national news as he made it himself again and won another medal for Uganda in Men’s 10,000 metres run in common wealth games that happened in Gold Coast, Australia.

The 21-year-old athlete who was born in Kapsewui in Kapchorwa showed his strength when he defeated his main competitors Mohamed Ahmed from Canada who won Silver and Rodgers Kwemoi who settled for Bronze while another Ugandan Jacob Kiplimo arrived as number four. Uganda managed to win 3 gold medals and two bronze medals. Another Gold medal for Uganda was earned by another young runner Stella Chesang.

Congratulations once again to the golden boy Joshua Cheptegei, you are the reason why the Ugandans who laughed at you are now praising you. You are among the top news in Uganda now.