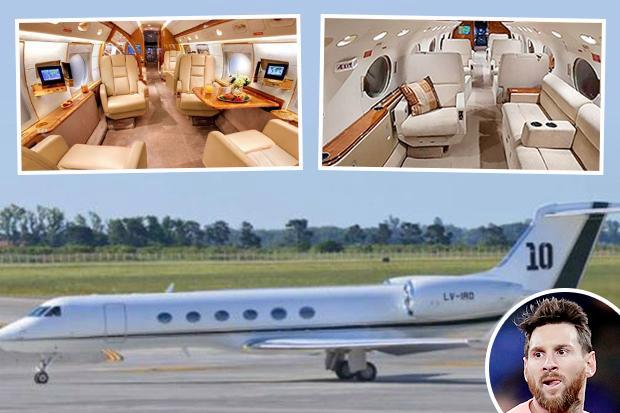 Barcelona’s Lionel Messi has purchased a luxurious private jet with a new state of art fitted inside. The aircraft that was custom made by an Argentinian company as per Argentine Website Double Amarilla, 2004 gulfstream V modelis fitted with luxurious interior designs like; reclining chairs and screens at every seat.

Messi purchased this private jet for himself, his wife and children’s. The jet has 16 seats, two bathrooms, few personal touches & bears names of his 3 boys Thiago, Ciro, Mateo and Antonella his wife on the plane steps that lead inside the main cabin.

Reports indicates that the 16 seats can be folded into 8 beds in case, one desires to sleep and also bears his iconic number, 10 pressed on the rudder of the plane.

It’s said Messi, the Barcelona’s super star has been leased the plane to travel around the world in luxury and comfort.

Leonel Messi FC Barcelona and Argentina’s striker began his professional journey in 2004 and as for now he is regarded globally as one of the greatest players of the time.

In March 2018, Lionel Messi scored his 600th goal of his career after 14yrs down the road in the Spanish La- Liga against Athletic Madrid match.

While in this season Messi has been flying high with 17 goals and 10 assists for now. On Tuesday he came off the bench during Barcelona’s 1-1 draw with Tottenham in the champions league playing for the Catalan giant’sgame.

In the list released for 2018 highest paid players by Forbes, it contains 22 countries with 100 players and 11 sports in which Leonel Messi in among alongside Stephen Curg and Rogers Federer.

Messi is among the 20 most treasured football players in the diaspora at the moment.