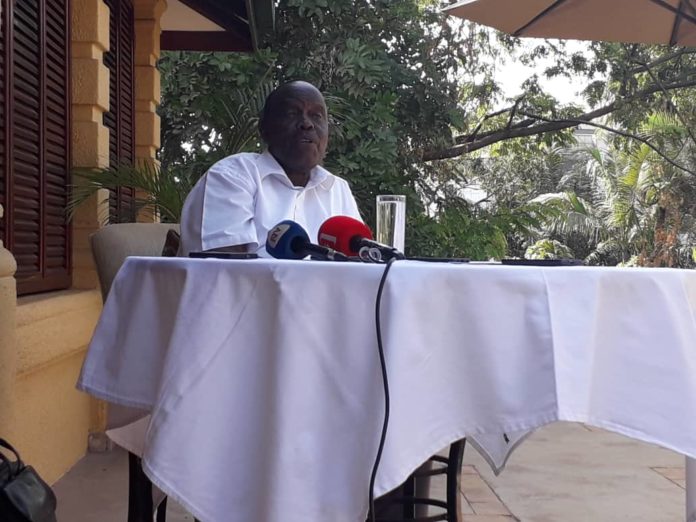 Maj Gen Matayo Kyaligonza, Uganda’s Ambassador to Burundi, yesterday Monday the 1st of April 2019, named MP’s take to recall him from the diplomatic service ‘stupid’. Kyaligonza in this case accused legislators of siding to only one part of the story.

Kyaligonza discarded the narrative of Esther Namaganda, the traffic officer he and his body guards allegedly assaulted, stating that legislators judged him without getting his part of the story at the time they debated his recall off his diplomatic duties.

“I am telling you now, there are ‘stupid ‘quote it. You cannot condemn a person whom you have not heard. And you the so called Member of Parliament, you were busy jumping over tables, breaking microphones. You have never even been recalled, or even fire in your own mind to start judging Kyaligonza.”

“Can I see your susu, I mean pupu, they call it what? yoyo. Can I know how big it is? Is it possible? it’s not possible? Can I gauge you and judge you by what you are talking? This stupid woman was busy saying all those people who are fond of beating women have got small yoyos. If she was not sticking, I would ask her that you come and surfer it and see if I have got a small one. Yes! That’s what she was saying and we can quote her, she was deliberating in parliament. Is that not a stupid debater?” Kyaligonza added.

Kyaligonza insists the stories that ran on all media platforms were interchanged and condemned the lack of a fair hearing between the two parties.

“This police woman was supposed to record a number of that vehicle which has taken a wrong turn and then you look for that driver on that day. But instead you don’t go in front of the vehicle ‘Akuuna Kyakupita apo’ you stand in front of it. And then you start arguing then this one says no but you ‘anasimamisa gaali ya General’ who is a General? Now supposing it was you, because this is human nature, arrogance is part of life, if you are questioning my integrity will this man who’s guarding me not get offended?”

Kyaligonza says he’s going to file a law suit of slander against journalists before Court. He however, attributed his political wrangles to his rivals in the political arena stating that they were witch hunting him.

“You police woman, you have seen some people there they have knocked me and the knocking is even supposed to be proved, because there’s a mechanic who repaired. Their very senior officers came and saw the vehicle in the garage. That day hardly two hours had passed, the car was there in the garage being repaired and then you the news people are not talking about that accident. The cause actually of the U-turn was after the accident.”

Following the debate on Kyaligonza’s conduct, Parliament decided to have him sacked from his Diplomatic duties after accusations of assault against Esther Namaganda, a traffic police officer. Kyaligonza and his body guard were accused of making an illegal U-turn in the middle of the road.