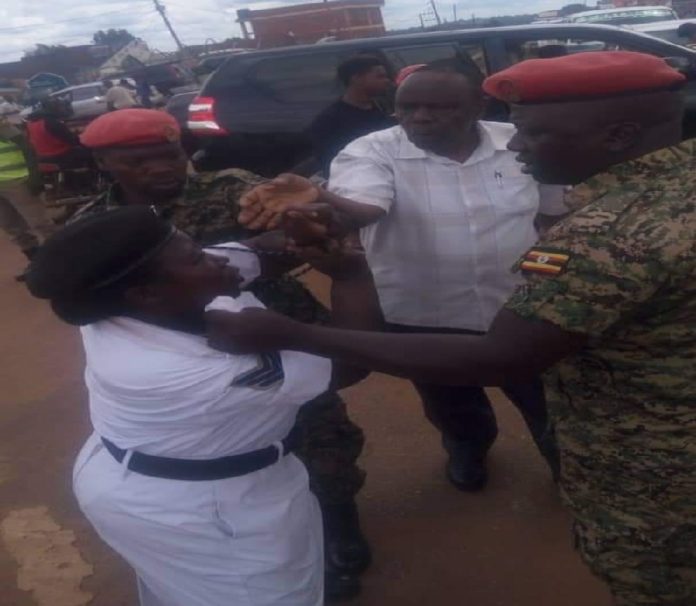 Maj Gen Matayo Kyaligonza, the Uganda’s envoy to Burundi has given out his statement to police at Naguru police headquarters, regarding an incident of assault against a female police traffic officer Esther Namaganda, two weeks ago.

Fred Enanga, the police spokesperson earlier on said Maj Gen Matayo Kyaligonza will be summoned to the headquarters to record a statement.

Following assault case involving a traffic police officer Esther Namaganda, who was slapped while on duty in Seeta, along Kampala Jinja high way on 24th February, after stopping Maj Gen Matayo Kyaligonza’s car which was making a U-turn in the middle of the road.

In accompany of his Lawyers,  Maj Gen Matayo Kyaligonza was directed to the Inspector General of Police (IGP) office for a closed door meeting that lasted nearly three hours. And after the meeting the Major left the police headquarter premises unnoticed.

Evans Ocheng, one of Maj Gen Matayo Kyaligonza’s lawyers said that his client had come to tell his side of story to police.

“The IGP wanted to interact with him and they had an interaction. He has given his side and that is it. Just an interaction when there’s something and the police wants you to give them your part of the story, you give it.”

He however, denied statements arising from public describing his client as an undisciplined and violent person.

“For me I know he is a calm man and very respectable man.”

It still remains unclear whether Maj Gen Matayo Kyaligonza will be prosecuted in courts of law regarding his conduct against a traffic police office on duty.