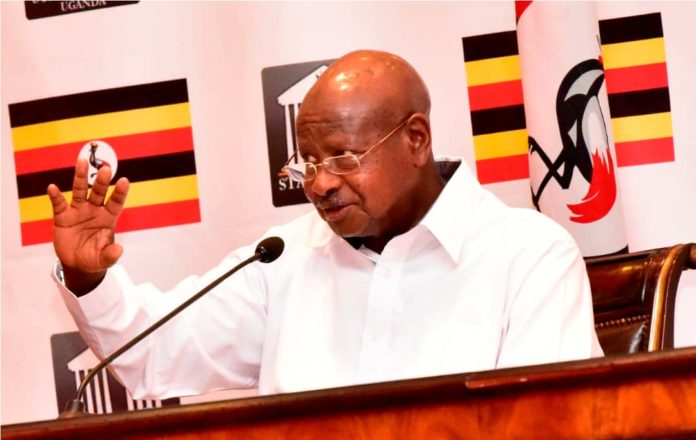 Maj Gen Kyaligonza slapped a female traffic officer, Esther Namanganda after stopping his car which had made an illegal U-turn in the middle of the road two weeks ago.

He says no security officer is allowed to slap and insult civilians asserting that he will have to face the law.

President Museveni made the remarks at Speke Resort Hotel Munyonyo in a high level meeting of Ministers in charge of refugees, in the great lakes region. As he outlined reasons why people flee their mother countries for refuge in other countries.

“Recently, we had a retired General slapping a police woman and everyone shouted. Now, that General is facing the law because you are not allowed to slap and bark at people. If you are angry and aggressive, you can ask for permission and we deploy you to Somalia where aggressive services are needed.”

He says that extrajudicial works are one of the leading causes of refugee situation in Africa. Including political instabilities (wars) in parent countries, environmental matters that are unfavourable to pastoralists and weak status of the country forcing their people to leave.

In his further remarks regarding refugee crisis in the region, he pointed out Democratic Republic of Congo (DRC) whose nationals are refugees in Uganda, over 300,000 of them. And also Somalia refugees in Kenya who were forced out of their countries, over thousands of them among other countries.

And appealed to the conflict resolution experts to analyse the matter of weak countries, come up with lasting resolutions that they should present to the Ministers.

President Museveni however, did not air out his view on the recent resolution made by parliament which demanded Maj Kyaligonza’s sacking from his diplomatic roles in Burundi as well as demotion from his army ranks.