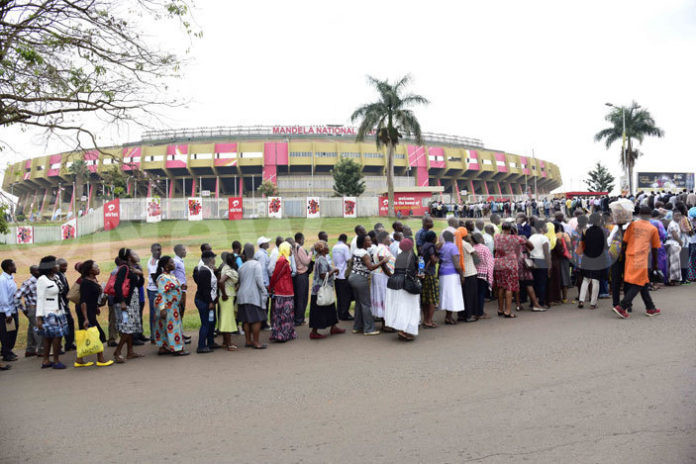 Mandela National Stadium plans to turn into an Olympic Stadium, has been lessened after losing 60 hectares of land to suspected land grabbers’.

And as a result, the Land Commission led by lady justice Catherine Bamugemereire on their visit to the contested land yesterday the 16 of May 2019, issued a summon to Wakiso and Kampala Land Board officials to provide answers on the claims.

The land in question, is on the Eastern side of Mandela National Stadium. Years ago occupants on that land were compensated by government, but today new structures including shrines, homesteads and Hotels have been raised.

This was revealed by the Land Commission while touring the contested land, under guidance of the Mandela National Stadium management.

Among the Hotels around, Mamerito Hotel owned by former Kira Division Mayor Mamerito Mugerwa is included.

While the western part of the Stadium, it’s occupied by Prayer Palace Church, Sports View Hotel, Veterans Parking Yard and other Commercial buildings.

The Stadium’s physical planning shows that the grabbed Western part of the Stadium was to have an Olympic Standard Swimming Pool and other Sporting disciplines which were yet to be constructed but now all plans were shattered following the encroachment.

Suspected land grabbers are already prepared to defend their land as one of the occupant’s lawyer states.

“My client went onto a register in 1982, the compensation scheme came up in 1990 something. So, she was on a title before they even compensated. They cannot produce any evidence; they don’t have anything at all.”

It was revealed that out of the 120 hectares of Mandela National Stadium land, 60 hectares has illegal occupants.

“We learnt that some of the encroachers are the local people doing activities such as the veterans with washing bays and smaller activities,” Bamugemereire noted.

She however said the Wakiso and Kampala land commission officials have a case to answer as regards to the encroachment.

“We are going to require the land officers in Wakiso to explain, the surveyors’ particularly how they created job record jackets out of the land that was already surveyed without taking into consideration the fact that there was an existing free hold,” Bamugemereire stated.