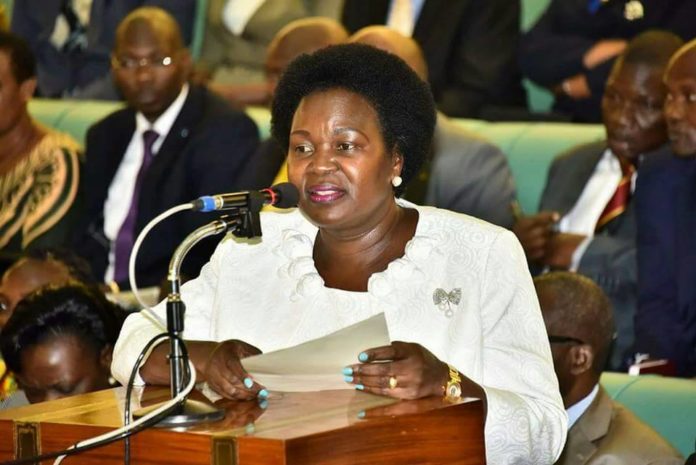 Government of Uganda has vowed to support Enterprise Uganda to effect and change its tale in Uganda. This was stated by Ruth Nankabirwa, the government Chief Whip also woman MP representing Kiboga district who promised to mobilise other government Ministries including the Office of the Prime Minister, Ministry of Finance to digest the matter and come up with a lasting solution on how to aid Enterprise Uganda.

Ms. Nankabirwa arrived at this resolution at a week-long basic Enterprise set up Tools training in Kiboga District. In her speech, she said that she will utilise her position in that Office to invite Minister of Finance Hon. Matia Kasaijja and the Chairperson Parliamentary Finance Committee, interact with them and line up strategies to help Enterprise Uganda.

“I have been lobbying for Enterprise Uganda to come to Kiboga since 2009 because I was looking for a suitable way of helping my people to appreciate how one can generate capital and start a small business.”

She added that government agencies should partner with Enterprise Uganda to sensitize their target community before advancing the money they give out to groups as capital grants to ensure sustainable utilisation of this money.

According to Nankanbirwa, she observed that most money given out as grants some people fail to refund the money simply because they lack business skills and perhaps they made a wrong choice of business which failed to generate profits.

Meanwhile, the Executive Director Mr. Charles Ocici stated that Ugandans were ready to lift the load besides pampering them.

“People are saying that we can channel our energies and change our future by ourselves.”

According to global rating, Uganda was credited as the most Enterprising state with many of their set-ups being confirmed.

Their training in Kiboga District equipped people with various skills that are supreme in aiding one start and sustain any business venture. It was attended by District officials and many residents of Kiboga District.

Finally, he appealed to government to utilise this chance to help its citizens kick poverty out of their lives.