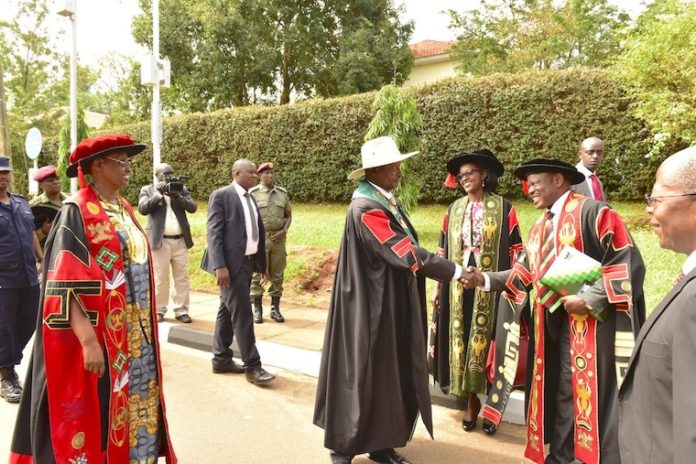 The University Council together with the University community honoured president Museveni with an Authorship Award for his excellent contribution in authoring a book written in Language Luyankore Lukiga entitled ‘Katondonzi’.

While addressing the assembly, President Museveni appreciated his award, congratulated graduate and thanked Makerere for honouring authors of ‘Katondonzi’.

Museveni advocated for prioritisation and discipline for the exercise of remuneration to speed up. And his counsel to social science scholars was for them to be focussed in their teaching indicating the inquiries on Africa’s colonialism.

Professor Nawangwe is the Vice Chancellor Makerere University who recently sacked 45 staffs of the institution over indiscipline cases including absenting themselves from work, awarding marks to student’s in exchange for sex, insubordination, assault and failure to hand in student’s exam marks in time among others.

“I want to congratulate prof. Nawangwe and team for being decisive in disciplining lecturers and staff. It’s quite embarrassing to see a so called lecturer in court for rapping a young girl and he is still teaching. That is rubbish, they should exit.”

He further stressed out that any staff who will be noticed in sexual harassment should be terminated immediately.

“Nawangwe has proved that people from the remote part of the country can do better jobs than the ones who have been rotating in Kampala. If you commit a crime, you should resign by yourself. We do not want indiscipline, crime, cheating exams, decadency at Makerere University.”

A Lecturer from the school of social science was allegedly accused of sexual harassment. The story begun way back in Feb. 26th 2018 when NBS Television ran a story accusing this lecturer of rapping his female student in exchange of marks.

He’s among the fired staff of Makerere University who contested their dismissal and since then they have petitioned parliament to intervene in the matter.

They claimed there sacking was illegally conducted.

Furthermore, Museveni encouraged graduates to create groups where government can channel in its grants at low interests or free interests to start-up businesses for self-reliance.

“It is not right to say that there are just disorganised. I am imploring them to form groups so that we can give them money to do various businesses like leather turning or maize processing. I do not see the reason why we should import certain items which can be manufactured from here.”

Makerere University is the Uganda’s oldest and largest institution of higher learning in Uganda established in 1922 as a technical institution.